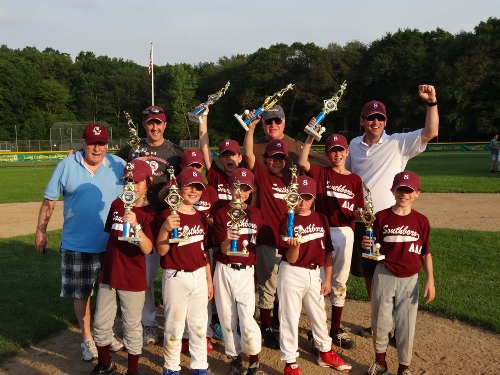 Above: Winners of the AAA championship in Southborough (photo provided, click to enlarge)

Two athletes out of Southborough that made it big in college sports made the news recently. And some passionate color commentary was contributed to share on the success of younger athletes playing in town.

University of Michigan shooting star Nik Stauskas wasn’t just coming to a city that might be his home after the June 26 draft. He was coming back to a place that was his home for two years while he attended St. Mark’s School in Southborough, and which in many ways he still considers home. (read more)

Former Bentley University football quarterback, Marc Eddy ’05 from Southborough, was named one of the school’s selections for the Northeast-10 Conference Hall of Fame:

Eddy teamed with Dallas Mall, a 2013 NE-10 Hall of Fame inductee, as one of the most dominant passing tandems in college football history. The six-foot-three lefty threw 121 touchdown passes during his four-year career (2001-04), a total that ranked first in Division II history at the time and eighth in all divisions. His career totals also included 11,035 passing yards, 10,819 yards total offense and a won-loss record of 37-7. (read more)

The team erupted for 15 hits, a season high. They got the scoring started with five runs in the top of the 2nd, three of them on a bases clearing triple by James McGrath. LCI got a run back in the bottom of the 3rd when Seamus O’Shea scored on an errant throw after reaching base on a double. Michael McEvoy got the crowd to its feet in the top of the 4th with a home run over the left field fence. LCI rallied for three runs in the last two innings but fell short in their comeback bid.

JBJ finished the regular season in last place, but they saved their best baseball for the playoffs, outscoring opponents 17-4 to take the title. The team would like to thank all the parents, coaches, umpires, sponsors and volunteers who made this fun season possible.