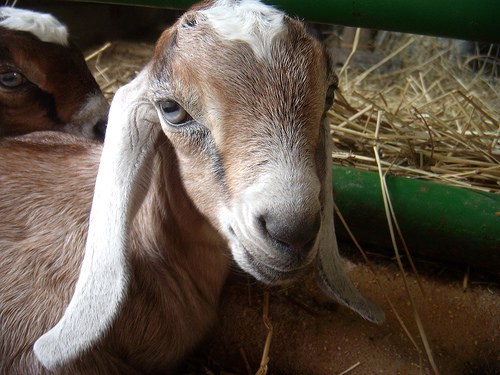 Above: Not everyone was amused by news of the goat-napping prank  (Image posted to Flickr by goat.pirate)

The recent roundup of Algonquin news had one glaring omission – this year’s senior prank. I just felt it needed it’s own post. (I didn’t want it to over shadow all the good news Alyssa was sharing out of the high school.)

ARHS’ Class of 2014 Senior Week prank gained media coverage by TV news after an angry goat charged at students who discovered it in the hallways.

Readers had mixed feelings about the incident. Since then, the school newspaper, The Harbinger, followed up with coverage on the fallout.

They report that four students took responsibility and have apparently been working with the school to make things right.

Four students (only two of which were seniors) took responsibility for the prank and identified themselves on the morning announcements:

At the behest of the administration, all four declined to comment. Administrators have refused to publicize the exact punishments handed down to the four students, citing privacy laws. However, certain faculty members alluded to the nature of the discipline. “There is some discipline involved and then there is some giving back to the community. There is a real recognition that what they did was not appropriate, by them and their families,” said [Assistant Principal Mel] Laughton. (read more)

About that goat (and other pranks): A message from Mike Gorman, Facilities Director – arhsharbinger.com

Facilities director Mike Gorman warns of the harmful affects of escalating pranks. And he advised students to learn from their mistakes

We call the school our community. We have a lot of pride in our staff, a lot of pride in turning over a world-class learning environment for you guys, and when it gets mistreated and just dumped on . . . you’re beginning to get into the disrespect area . . .

I don’t want to punish and criticize everybody… 15 students after the parade came back to me with real sincere, “Can I help you? Awesome job.” Even the kids that made some poor decisions, they worked with us today, they’re working with us, and I’ll tell you that they’re great kids. One night of being a knucklehead: learn from that. When you go to college, there will be other challenges out there. We want you to learn from it, and we want you to be safe… (read more)

Class of ’63. We just had our 50th reunion, and laughed heartily about the skunk we put in the inside garden the day before graduation. Mr. Higgiston was not happy with us. I guess things change, but stay the same. I turned out to be a college professor at a prestigious institution, and one of my “partners in crime” was Chief of Police and shall remain nameless. Now a days, I’d probably feel sorry for the skunk, but he waddled out without incident and his descendants are probably still around!