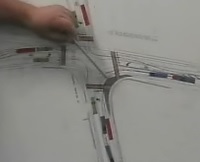 Left: Town consultant, John Bechard, points out the extra expanse of road (shaded) needed for a tractor trailers towed by a local business to make the turn at routes 85 and 30. (Image cropped from Southborough Access Media’s video)

The Board of Selectmen last night voted for the Main Street Design Working Group to continue their work. The BOS opted not to “block” their progress despite disappointment in the state’s position on the central intersection.

In a meeting with representatives from MassDOT this July, members of the working group learned what the state may and won’t budge on. Reducing the size of the widened design for the intersection at routes 30 and 85 was “a no”. The intersection was the focus of much of last night’s 2 hour discussion.

On Monday night, the working group voted in favor of continuing to explore the project, even knowing the intersection would be “essentially” the size shown. The vote was 5 in favor, 1 opposed, and 1 abstention.

Chair Marty Healey wanted to know if the size of the intersection “was a deal breaker” for selectmen.  The group was concerned the design work would cost “a decent amount of money”. Healey said:

If we know now that that size of the intersection is unacceptable, then we shouldn’t spend the money on VHB.

The board was unwilling to endorse the intersection yet, but wanted the group’s work to proceed.

Some selectmen continued to hope the intersection size could be reduced.

The town’s engineer consultant explained that the intersection size isn’t just for extra turning lanes. John Bechard of VHB, stated the design incorporates the arcs for turning school buses, fire trucks, and towing vehicles that use those roads. He pointed out the extra expanse of road needed for tow trucks towing tractor trailers to make the turn.

Bechard said VHB had observed their regular use of the intersection and designed accordingly. He said the state won’t allow them to prohibit the local business from using the to be federally funded public routes.

MassDOT’s proposed solution to “a sea of asphalt” was to allow the section of the turn for towed trailers to be a different material. Options include a colored epoxy or pavement treated to look like cobblestones or bricks.

Selectmen were upset to hear that a single business could make a difference in the size of the intersection.

The trailers in question are towed by Ted’s of Fayville on Park Street. Department of Public Works Director, Karen Galligan, said the business needs to use Route 85 to get to Main Street from Route 9. (They can’t take Central Street.)

Selectmen wondered if an alternative could be found and agreed to. Chair Bill Boland said he would reach out to Ted’s to see if the business would agree to “a waiver” rerouting the trucks.

The board debated last night whether a vote was necessary and what it would mean. Members Paul Cimino and Bonnie Phaneuf made it clear their vote was not an endorsement of the intersection.

The vote charged the working group with further design work on the project. They are to work with VHB and the DPW on the options offered by MassDOT. They are then expected to return to the board with their recommendations.

Options to be explored include grass strips between the road and sidewalk, possibility of eliminating some sidewalks, and allowable traffic light options at the police and fire stations’ driveway.

Selectmen assigned additional work to VHB. Selectman John Rooney asked for VHB to project future traffic at the intersection through 2029.

Selectman Bonnie Phaneuf asked Bechard to look into a MassDOT project in Weston slated for 2015. Phaneuf said it included an intersection with 4 turning lanes. She believes that Weston requested and received a waiver to remove one of the lanes.

The board is also still waiting to get the questions and feedback that the public provided MassDOT and the state’s answers.

MassDOT is hoping to hold another information meeting in October, date TBD.

“John Bechard of VHB, stated the design incorporates the arcs for turning school buses, fire trucks, and towing vehicles that use those roads. He pointed out the extra expanse of road needed for tow trucks towing tractor trailers to make the turn.”

I would like to hear how many more buses, fire trucks, and tractor-trailers other than Ted’s use that intersection. I’m willing to bet there are far more turns taken by other similar sized trucks than Ted’s.

Townie, altho I do want the new intersection, I do agree with the absurdity of a Ted’s 30 ft. Wrecker towing a cab and 40 ft. trailer ever trying to make that corner. Those guys are good, but that’s impossible. I thought the new intersection was to allow for safer and quicker left turns for daily drivers, but Mr. Bechard of VHB seems more focused on the seldom trips of school buses and fire trucks that have been using it for years, not a good argument. And for the life of me, I can not figure out why Ted’s aren’t allowed to use Central St.

And don’t forget the fire department’s tower ladder truck. They need to be able to swing through that intersection no matter what the traffic is at any given moment.

The drawing by VHB showed diagramed the turning arcs required for fire trucks. The tractor trailer trucks attached to tow trucks were shown to require a bigger turning arc. The shaded area is basically the difference between how wide the road would need to be for fire trucks vs the bigger vehicles.

Souse- there’s a commercial vehicle restriction on Central St with signs at each end (not that that stops a lot of that type of vehicle from using it). Also, school buses have no trouble turning from any direction at the existing intersection when motorists are at or before the stop lines that are painted on the road surface.