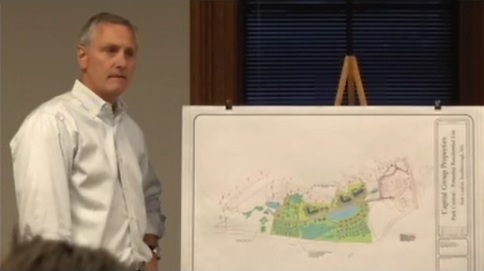 The Zoning Board of appeals voted to support Capital Group Properties’ plan to apply for a use variance at Park Central.

If the actual variance is approved, it would allow development of condominium homes on land currently zoned as industrial. The new development would be in addition to the currently proposed 180 condo unit 40B project. The vote was cast at a public hearing on that 40B.

The board’s intent is to incentivize developer Bill Depietri to change the 40B from for sale units to rentals. That would allow the town to stop or control proposed future 40Bs in town.

Earlier this month, Depietri informed the board his future plans included two more 40B projects in several large buildings on the 87 acre site. He projected a potential total of 580 condos over several years.

ZBA Chair Leo Bartolini asked Depietri to work with the Town Planner on an alternative future plan. Depietri presented a draft of that new vision to the ZBA on Wednesday night.

The draft apparently encompasses around 90 single, double and triple condo units for sale. (Depietri only specified he couldn’t fit the 150 envisioned by the Town Planner. But, no one contradicted a neighbor’s mention of 91 units.)

Attorney Dan Hill, representing some of the abutting neighbors, said the additional proposed residences would be problematic for his clients.

Hill questioned Bartolini’s premise. “You are assuming that the two other 40B projects that have been threatened would actually be viable.” Bartolini responded, “Oh, definitely.”

Capital Group plans to “slow down” the permitting for the current 40B while applying for the use variance. Once the project is approved and appeal window expires, they will make changes to the 40B plans.

If the variance doesn’t come through, they would continue to seek the original 40B project.

The contingent plan would include changes to the 40B design. Instead of five 3-story buildings, the 180 units would be split between three 4-story buildings. The taller buildings would be set further back from abutting residences and lower in elevation. And Depietri said he would consider a neighbors’ request to “flip” the proposal to put the single units closer to the neighborhood and larger buildings further away.

Completion of these projects and a planned sewage treatment plant would leave Depietri with two remaining areas of undeveloped land. Four acres could be developed for industrial use. The other section could be undeveloped with a deed restriction or donated to the town.

Traffic from the project continued to be a point of contention with neighbors. Bartolini stated that a submission from Capital Group’s traffic consultant claims that 580 units would not be a major traffic issue.

Hill rebutted, “There may not be an engineering problem with it per se. But it will have tremendous impact on the folks that live on these streets.”

He argued that the board has the right to permit the traffic exit Park Central Drive onto route 9, except for emergency access. Bartolini countered that when the original subdivision was done in 1970 and roads built, the access points were included. Those rights were included in the Park Central property sale.

Depietri was adament that keeping the traffic out of the residential roads through Bantry was “a showstopper”. His only potential concession would be to consider allowing the residential section to turn left on Flagg Road.

Hill argued that Depietri needs to work with the neighbors, or they will appeal the variance. Depietri said he was willing to see what happens. Bartolini ended their argument, directing  for attorneys to discuss the issue outside the meeting.

The next hearing on the 40B is scheduled for October 1st. Bartolini warned that with the loss of one board member, future hearings will be cancelled if any members can’t make the meeting.

Still seems like this is WAY out of place in this location, especially since no one seem to have a valid estimate for traffic.
—But right now I want to note that to call it a 40B development makes it seem to some people (and some I’ve heard from) that ALL of the units are affordable housing. Not true.
It is a certain percentage of the units… Who remembers the percentage? (I’ll look it up.
A second misunderstanding of 40B housing is that it’s confused with low income housing.
—Also not true. To be eligible to bid on buying a 40B unit–which has to be built no differently than the market rate units, an applicant has to be able to quality for a mortgage that is determined by statistics for the greater Boston area. I haven’t looked up the numbers lately but I will and write another comment. I do remember saying that the mortgage would be out of my reach and so I could not afford to apply for “affordable” housing. (That’s not a complaint… just an idea of the kind of income we’re talking about isn’t poverty level! It’s also no subsidized housing but is bought outright by a qualified owner.)
The plain fact is that developers take advantage of this provision that means the state can overrule some/all of the town’s attempts to require, say, certain traffic patterns.
I have served on the affordable housing trust committee for several years, though our focus is on acquiring housing with the help of some of our CPA funds…. not involved in any of these large-scale developments.

For % – I had trouble finding the info from an official source.

So, while I found info – it’s from a developer’s website. So, I can’t vouch for accuracy:
“In order to qualify for Chapter 40B housing, at least 20-25% of any proposed development has to provide housing which serves households at or below 80% of the area’s median income.”

I’ll write (I know it’s later but) to affirm Beth’s percentage number… I want so scream when I see someone give the wrong srtas without knowing or thinking either. Another thing to keep in mind: once we have met the quote (7% of ALL of our housing, I believe is correct), then we are no longer obligated to allow builders to do below-market-rate housing. And I remind once again… this is not low income housing. The owners have to qualiify to pay a mortgage and I mention, not necessarily in support of..saying that that does leave out people considered lowo income. One purpose of this leegilsation is to make sure that we don’t turn into a Commonwealth of rich people… guess that’s a way to say… people with higher icomes, people of means or whtaever some of us think it’s important to have a balance.if we are to be the America we honor and sing about..
Donna