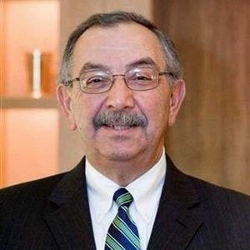 Richard V. Aghababian MD, of Southborough, died at home on Wednesday, October 1, 2014 with his family gathered by his side. He was 66.

Born in Boston on July 7, 1948 he was a son of the late Vahe and Zarie (Arslanian) Aghababian and was raised in Newton. A graduate of Newton South High School, class of 1966, he graduated from Harvard College in 1970 and was then a member of the first class of the University of Massachusetts Medical School in Worcester in 1974. He married Ann E. Bachini on August 13, 1972 at St. Stephen Armenian Apostolic Church in Watertown.

Dr. Aghababian was the Founding Chair of the Department of Emergency Medicine at the University of Massachusetts Memorial Medical Center. His commitment to healing patients and educating physicians interlaced his varied interests: emergency medicine, disaster medicine, medical education abroad, and continuing education for physicians at home. He was a Professor of Emergency Medicine and retired Associate Dean for Continuing Medical Education at UMass, Past Commander of MA-2 Disaster Medical Assistance Team, Past President of the American College of Emergency Physicians, and Past President of the Massachusetts Medical Society.

In addition to his work in the medical field, he also enjoyed the beaches and golf on Cape Cod. However, times spent with his family, either at home or on the many vacations they took around the world, were his most cherished moments.

In addition to his wife of 42 years, Ann, he leaves his children, Emily A. Groccia and her husband, Michael, of Grafton who await the birth of Richard’s first grandchild, and his son, Andrew M. Aghababian of Newburyport. He is also survived by his siblings, Robert Aghababian and his wife, Sandra, of Lexington, Alice Hagopian and her husband, Mark, of Eastham, and Victoria Wicks and her husband, Bruce, of Charlestown, Rhode Island, and many nieces and nephews.

Family and friends will honor and remember Richard’s life by gathering for calling hours at Heald & Chiampa Funeral Directors ~ The Sumner House, 5 Church Road, On the Common, Shrewsbury Center on Monday, October 6th from 3 to 7 p.m. His Funeral Service will be held on Tuesday, Oct. 7th in The Armenian Church of the Holy Translators, 38 Franklin Street, Framingham at 11 am. Rev. Fr. Krikor A. Sabounjian will officiate. Burial will follow in Rural Cemetery, Southborough.

In lieu of flowers, the family requests that donations be directed to the Richard V. Aghababian MD Fellowship at the UMass Memorial Foundation (UMMF) and mailed to UMass Medicine Development Office, 333 South Street, Shrewsbury, MA 01545.