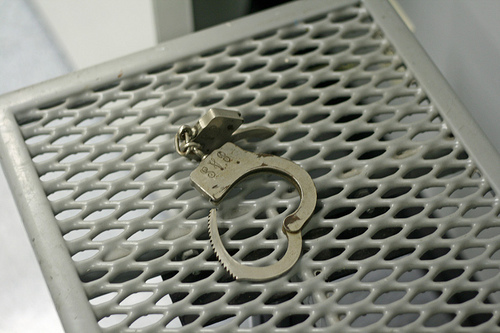 Above: A warrant has been issued for a suspect in Southborough thefts. But as of last night, the arrest wasn’t yet made. (Photo of Southborough Police booking room by Susan Fitzgerald)

This September, there were several reports of burglaries from homes and vehicles in town. Last night, Southborough Wicked Local reported that a homeless man from the Worcester area has been charged with the thefts.

SWL writes that a Westborough Police investigation led to the charges. The suspect, Stephen Davidson, was identified by a witness and confessed to the crimes.

Police said Davidson admitted to stealing from many unlocked cars, breaking into an Oak Hill Road home, and stealing copper pipes from the historic Garfield House on Main Street.

Southborough police were investigating multiple thefts from unlocked cars last month. Most of the thefts were near Oak Hill Road and Cherry Street. Police said they think [Davidson] is the only suspect.

The article also revealed that Davidson previously lived in Southborough for a week.