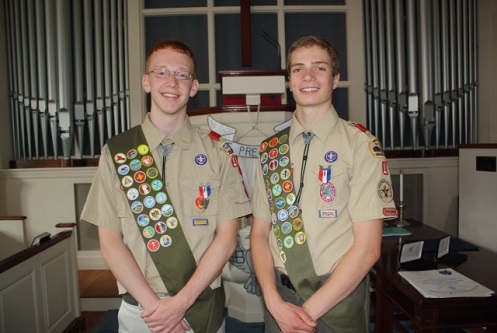 Robert Kersten and Chris Schoener, of Southborough, earned their Eagle Scout badges this August, after revitalizing a Bird Garden and leading a team to improve a walking trail near the Liberty Estates neighborhood.

The goal of Kersten’s project:

was to restore the beauty of the garden along with educating the public on its natural resources. The project involved removing unwanted brush, laying down mulch and gravel, along with installing signs identifying native plants,” according to the press release.

The Bird Garden is located in the Wilfred J.Turenne Wildlife Habitat in Southborough.

According to the press release, Schoener’s project:

involved building and installing a new bridge which crosses a 12 foot gap over a stream on the [Liberty] trail. Additionally, the team laid down gravel and cleared away brush.

Eagle Scout is the highest ranking for a Boy Scout. One must earn 21 merit badges and successfully complete an “Eagle project which demonstrates planning, execution and leadership of a community-service project.”

Only four percent of all Boy Scouts complete all the requirements, according the press release.

Below are contributed photos of the scouts at work and their results.

Scouts wheeling the partially completed bridge (on scooters) down to the Liberty Trail.

Scouts (from right to left) Freddie Pimm, Patrick Moran and Chris Schoener take a break on the completed bridge.

Completed laying down of mulch at the Bird Garden.

Scout Rob Kersten next to one of the many identified plants in the Wilfred J. Turenne Wildlife Habitat.

One of the identified plants in the Wilfred J. Turenne Wildlife Habitat

One of the identified plants in the Wilfred J. Turenne Wildlife Habitat.

Scouts working on a 12 ft bridge to go over a stream on the Liberty Trail.