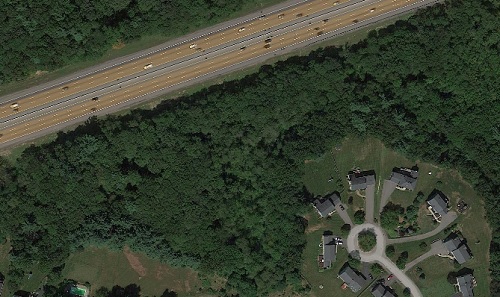 Above: In limbo open space between the Mass Pike and Killam Farm Lane and Richards Road properties was once marked on plans as a “farm dump” and purportedly treated as such. (Image from Google Maps)

The Planning Board discussed the status of an Open Space process and issues at two apparently unprotected parcels this week.

For much of the discussion, the Planning Board and Town Planner were on the defensive. At issue was a letter from Open Space Preservation Commission to the Board of Selectmen asking for help.

Referring to long unresolved issues at Killam Farms and Pine Hill, the OSPC wrote to the BOS. After “numerous attempts to follow up on these items through the Planning Department and [have] gotten nowhere”, the commission was looking for their help.

Town Planner Jennifer Burney decided to put the OSPC letter on the Planning Board agenda for Monday night after it was shared with her by the Town Administrator. Some board members and Burney took the letter as a criticism.

And Planning Board Chair Don Morris was concerned about the time Town Planner Jennifer Burney invested in the work to answer OSPC questions. He worried that Burney is being treated as “the workhorse”:

If that’s what we want, I think we need to have clarity on that. . .

If that part of the process belongs to the Town Planner, then we can know that and we can develop our budget and manage our Planning Department time accordingly.

According to Luttrell, OSPC had identified the two projects as being ones they wanted to tackle resolving. Her impression was that the answers they needed laid with town counsel. The commission was looking for BOS’ help getting those from him.

She also said she would have been happy to share her “abundance of information” on the projects had Burney asked.

Planning Board members questioned the inquiry coming while the boards are in midst of an RFP (Request for Proposals) to contract research work on open space issues.

The work would include identifying Open Space parcels and looking at whether there are parcels that are unprotected, haven’t been accepted by the town, and/or missing Conservation Restrictions.

Member Andrew Mills also informed/reminded the viewing public that implementing an Open Space process was one of the priorities the Planning Board identified as a goal last month.

[Editor’s Note: Last month’s Planning Board meeting had audio issues. Some residents watching from home may have given up before goals were covered. But the audio was working for that discussion. You can view it here, starting about 1 hour and 4 minutes in.]

The Town Planner updated the board on her research into the Open Space parcels’ status. She said she had spent a lot of time searching for answers, but still needs more.

Earlier that day, Burney spoke with Town Counsel. He believed both items had been resolved. Regarding the Pine Hill Conservation Restriction, she read from a 2008 letter from counsel recommending to the Planning Board:

that the CR be accepted, advanced to the selectmen for review and for possible approval, and then forwarded to the state for final review and approval.

Burney said she didn’t know if selectmen ever reviewed or approved, and/or whether it was ever forwarded to state. She was continuing to research that.

Luttrell was concerned that the last version the OSPC saw of the CR draft included uses not permissable under zoning bylaws.

As for Killam Farms, counsel provided the opinion years before Burney was hired. The Town Planner was searching the files and submitting a request through the Town Administrator to have counsel resubmit his opinion.

In addition, Burney reached out to developer Kevin Giblin to see where things stand. She said that he scheduled a meeting for the land’s trustee to bring the file to Burney’s office and show everything was “final”.

OSPC member Frederica Gillespie said the only opinion they had seen from counsel on the parcel was in 2006 saying it should be accepted. That was written before OSPC saw that that the plan included an identified “farm dump” crossed out and replaced with “open space”.

Walking that site, the commission discovered a large dumping ground including including car engines, housing and 50-gallon drums. They were concerned there may be hazardous waste that could leak to a stream that feeds to the Sudbury River and adjacent to wetlands. They are worried about legal ramifications for the town if they accept the parcel.

Discussing status for an open space process, Burney said that she had been working on it under the board’s guidance. In addition to constituents in town, she spoke with ten other towns about their process.

She has drafted the necessary steps for the Planning Board to review. Morris said the next step would be to distribute it to other stakeholders to get their agreement of what is involved the process.

After that they can work on who is responsible for each step. That would be decided in a meeting with the Town Administrator, Conservation Commission, OSPC, Building Inspector and a Planning Board member.

Member Kathleen Bartolini urged that a selectmen also be involved to avoid everyone saying “that’s not my job.”

Luttrell responded to one possibility mentioned of OSPC being responsible for inspections. She said town counsel would need to advise on their rights if a developer bans them from the property as has happened in the past.

Shocking! More open land issues in Southborough….just when we thought the Barn Hollow saga was over…now new issues elsewhere….were the residents of Barn Hollow so awful???? Or is there a leadership issue in the town..seems to me the entire system is very broken…..town leaving themselves open to litigation again and again….

0
MarthaB
Reply to  So over Southborough