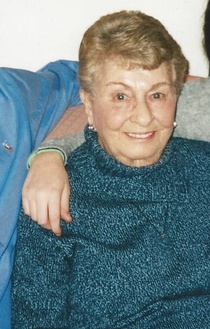 Rita M. Keaveny, 89, of Southborough, formerly of Easton, and Brockton, passed away peacefully on Wednesday, October 8, 2014 at the home of her son. She was the wife of the late Robert M. Keaveny.

Born in Boston, she was the daughter of the late James and Angelina (Monaco) Driscoll and was educated in Boston schools.

Rita was a communicant of St. Luke the Evangelist Church and a member of the Southborough Seniors. She has been a resident of Southborough since 2000 previously living in Easton and Brockton for many years.

She is survived by two sons, Paul E. Keaveny of Framingham and Robert T. Keaveny and his wife, Jane, of Westborough; one daughter, Jeanne M. Keaveny of Phoenix, AZ and two grandchildren, Caitlin and Connor Keaveny.

She was the sister of the late Margaret Kiley and Mary Driscoll.

Her funeral Mass will be celebrated on Saturday, October 11, at 10:00 A.M. in St. Luke the Evangelist Church, 70 West Main St., Westborough. Burial will follow in St. Luke’s Cemetery.

In lieu of flowers, donations in her memory may be made to Salmon Home Care, 37 Birch St., Milford, MA 01757