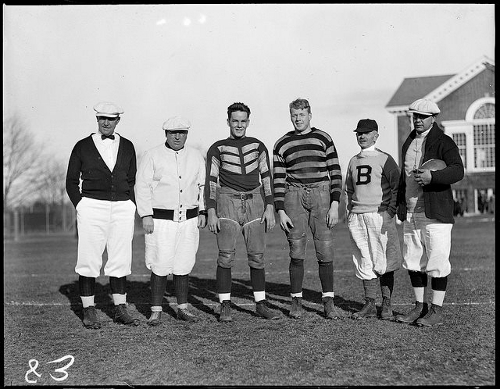 Above: Talk about your “Throwback Thursday”, this St. Mark’s rivalry dates back 125 years. (Photos of players and coat from Facebook)

This Friday, Algonquin’s football match will be anti-climactic as the team is out of the playoffs. But there are some from town that are really pumped for Friday night lights in Groton.

The schools’ rivalry dates back 125 years and the school’s website shares it is “the second longest prep school gridiron rivalry in the nation”.

The teams will be playing for bragging rights and a symbolic raccoon coat, while competing for the Burnett-Peabody Bowl:

This Friday, eight St. Mark’s teams will square off against opponents from Groton, continuing a historic rivalry. What makes this year particularly special is that this will be the 125th meeting between the two schools in football, the second longest prep school gridiron rivalry in the nation. Once again, the two schools are vying for the coveted raccoon coat, while kicking off the year-long competition for the Burnett-Peabody Bowl. In 1886, it was simply for bragging rights between the only two Episcopal boarding schools in Massachusetts.

The very first contest between St. Mark’s and Groton was a football game, played at a neutral site in Lancaster, Massachusetts, on October 30, 1886. St. Mark’s was the senior member of the pair, having been founded some 17 years before Groton. St. Mark’s was also the favorite that afternoon, as its football team was undefeated so far that season. It was, however, a touchdown scored by a young Groton master—William Greenough Thayer—which gave the win to the upstart Grotties. There was no SM-Groton game in 1887, as the two schools were arguing over the participation of faculty members on varsity teams. A year later, the gridiron rivalry resumed, as both sides agreed that masters (with restrictions as to playing weight and numbers) were allowed. Teachers played on student teams for both schools right up into the first few years of the 20th century.

For the full story, check out the school’s website.