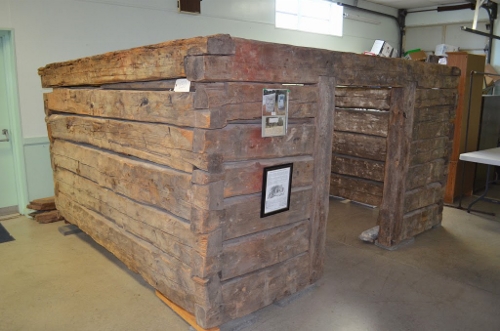 Above: This transportable hut was purportedly used by American militia in Southborough in 1775. It’s up for auction through tomorrow. (Photo from auctioneer’s website)

With Selectmen now promising an update on the Garfield/Burnett House*, you may have expected me to post about the fate of that historical property. But, today what I discovered in my inbox was news on much older lodging.

OK, “lodging” may be stretching it. The log hut up for auction today and tomorrow was purportedly used for provisions. The significance is it’s listed as being used by soldiers in Southborough during the revolution.

Revolutionary War Soldier’s Log Hut from Southboro, Mass. Research indicates that this is the only survivor from the thousands constructed during the time of our independence. Termed the “First Model” – it was built without pegs in order to be easily transportable. This museum quality artifact is truly unique and was acquired from collector and author Frank Kravick. This log hut has squared and dovetailed timbers with no pins to facilitate moving by dismantling and putting on a wagon. The hut is built of “hard pine” (related to Southern Yellow Pine), now extinct in New England. Hard pine originally grew along the coast and particularly on Cape Cod. Used largely in furniture making, this wood was essentially destroyed by agricultural methods. Southboro, Massachusetts served as a rear staging area for troops coming to the north, to be assigned to the American line at the siege of Boston, April 1775 – May 1776. It also served as a quartermaster depot for goods and provisions for the army at Boston. Commissary Samuel McClellan Page | 18 operated from there. This hut is the only one to survive of five or six still in existence earlier in the 20th century. When discovered in 1974, it was sheathed in weathered red stained pine boards with a shingle roof, and had served as a tinsmith shop in the 19th century. Both adze and hewing axe marks are prevalent on the timbers, and remnants of whitewash are evident on the interior.  (open pdf)

You can find auction information here. And for more pics, click here.

*The Town tweeted earlier today that Selectmen will provide an update on the Garfield House at their November 18 meeting at 7:00 pm. (That’s all the info I have to share for now.)

“Termed the ‘First Model’ – it was built without pegs in order to be easily transportable.”

Little known fact: it was often assembled behind horse-drawn wagons in parking lots during tailgating parties at… Patriots football games.

This might be one of your coolest posts yet, not as important or newsworthy, but something most of us would never had heard about, for that I thank you. It baffles me why the people selling didn’t put the “ugh” on Southborough. Any idea where it was found?