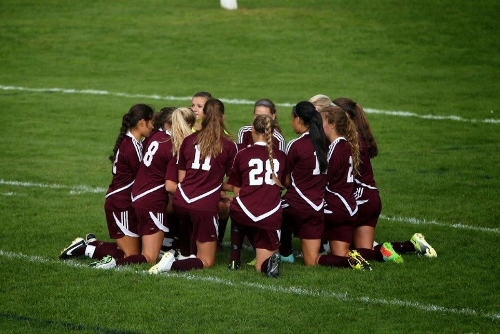 Above: Algonquin Girls Soccer pulled out a win against top seed competitor in their semi-finals Saturday. (Photo contributed by Kerry Stassi)

Fall sports are narrowing down to division champs. And a handful of Algonquin Regional High School varsity teams are still in the game.

The top seed Boys Soccer battled Westborough in division semi-finals Sunday. The game went into overtime with our boys capturing the win, 4-3.

Now they’ll cede home field advantage to their challengers in the division championship. They head to Wachusett on Saturday, November 15 at 5:00 pm for the finals. It happens to be the only team that the ARHS Boys have lost to this season.

Wachusett entered the tournament 3rd seed, but beat out 2nd seed Shrewsbury to make it to the finals. ARHS faced off against them twice this season. Both times ended in a 4-2 score – one win, one loss. The Boys may be looking at Girls Soccer’s outcome Saturday as a good omen for the coming match.

The Girls also pulled out a win in overtime. The 4th seed team was up against top seed Wachusett in the semi-finals. With a 2-1 win, they head to the division championships.

The match is set for Saturday, November 15 at 1:00 pm. They’ll play Nashoba on that team’s turf. In season matches, Nashoba was one up on ARHS – with one tie and one win.

On Saturday, Cross Country competed in 5k Runs for their divisions. The Boys came in 7th, but the Girls placed 3rd.

The Girls will head on to the State tournament. Their race is scheduled for 12:20 pm on Saturday, November 15, 2014 at Franklin Park.