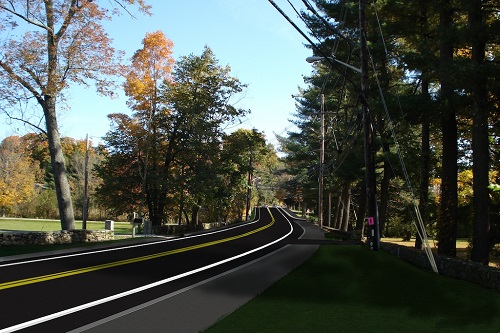 Above: This rendering of Deerfoot Road last spring wasn’t embraced by some Main Street project opponents. Last night, the BOS approved improved plans that incorporated feedback like inserting a grass strip between the sidewalk and road. (Image from DPW website)

Earlier this year, meetings in town were packed with residents concerned about a project to reconstruct Main Streets. Some were adamantly opposed. Some were looking for clarity. And others were worried about it being derailed.

Several vocal residents worried that plans would convert Main Street from a country road to a highway.

Fast forward to last night. Selectmen had before them a vote to approve reconstruction plans. But while the room was packed, most attending seemed to be there for a different agenda item.

Last night, the Board of Selectmen voted unanimously to approve the 25% reconstruction plans for a portion of Main Street, Route 85, and Common Street.

A few parties raised concerns about elements that the Town will continue to review. But no one objected to moving forward.

Of course, the plans voted last night weren’t the ones that were at the center of controversy. They were improved plans shared this fall.

In the spring, the board appointed a volunteer working group to help bring the community to a consensus. It apparently worked.

In collaboration with the Department of Public Works, the group slogged through plans and reports, They held public meetings, listened to feedback, questioned Town officials and engineers. They worked with Mass Department of Transportation reps. And they wrote up reports and explanations for decisions made.

In the end, they put forth what they described as their best effort to balance safety needs against protecting Southborough’s “character”.

Following up on the efforts, the DPW and Southborough Access Media posted a new video this month. The video described the plans improvements.

In it, Director Karen Galligan explained the difference between reconstructing the road and simply repaving. She made her case for why reconstruction is necessary.

Parry addressed the board last night to thank the Main Street Design Working Group. He started off by recounting how he tried to have a group independent of the BOS put together by the Town Moderator to review the plans and alternatives. (That effort narrowly failed at Town Meeting.)

He said that what happened since then was positive:

The [BOS’ appointed] working group did examine most of the issues thoroughly. They recommended many positive changes, reducing the negative impacts. The result is this revised plan. . .

I believe that most of our original objectives have been met and this revised plan is probably the best that the Town can get. And I want to thank the working group for its work.

Thanks were also offered by selectmen. They thanked the group, DPW and consultants for their efforts. Perhaps most notably, they thanked the original project opponents.

Selectmen credited the residents who questioned the project for raising important concerns and ultimately improving the plan.

The plans approved last night were for MassDOT’s 25% phase. There will be more changes going forward. One change that the DPW will pursue is adding back in parking in front of Dr. Stone’s office.

That request was made by the board after hearing from the property owners. The parking effects both the office and the nearby Funeral Parlor owned by the Morris family. Selectmen agreed that engineers should shoot for a compromise between improving the sight line at Middle Road and eliminating parking. They hope spots can be reduced rather than eliminated.

Another concern for review is ensuring that the drainage needs of the Southborough Library are properly tied into the project.

And Selectman Bonnie Phaneuf clarified that residents will still have the chance to weigh in on drainage basins at Parkerville. (The design of basins was addressed as a resident’s concern in his letter to selectman that otherwise supported the project.)

Phaneuf said that basins would need to be approved by the Conservation Commission in public meetings. Abutters will be notified when those hearings take place.

As plans are finalized, residents will be given more feedback opportunities. MassDOT will hold a public meeting on the project, likely in December.

And as the DPW continues work towards the 75% plan, public feedback will be requested. Galligan will seek feedback on landscape design and materials choices (e.g., sidewalks, crosswalks). Landscaping will include the replanting of some trees that will taken down for the project.

The working group has volunteered to continue working with the DPW through the final plan.

Thanks for this detailed post. I am heartened that the plan was improved through consideration of input from those originally opposed. This appears to an excellent outcome!

The one thing that really concerns me is there will apparently be no improvements made to Main St. from Sears Road to Chestnut Hill Road. This is a state road and it is in horrible shape. It needs an overdo also but apparently this is being ignored. We will have a beautiful Rte85/30 intersection but still bump along on Rte 30 west. How did Northboro manage to get Rte 20 from Bartlett St. to Davis St. completedly repaved so nicely?

The people in Northborough have better things to worry about.