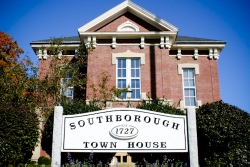 The position is for the three month vacancy between Town Clerk Paul Berry’s retirement and the annual Town Election.

The appointment allows a temporary 10% salary bump in consideration of the extra workload for the period.

Jenkins has worked for Southborough under Barry for the past five years. Today, she told me, “I am just happy to help the Town out through the transition process of a new Clerk. ”

Since she isn’t a Southborough resident, Jenkins is ineligible for the elected role. Since the clerk oversees that election, her ineligibility was seen as a plus by some selectmen.

The temporary promotion was one of several options open to the board.

The vote 4-1 in favor, appeared to be heavily weighted by the short period of time between appointment and election.

Selectman Dan Kolenda informed the board that Berry told him Jenkins would be the “wise choice”. Pointing to the short window for the position, he opined that interviewing for someone else would drag on to long. He believed that training someone else could be a waste of the department’s time if a different candidate won.

Selectman Bonnie Phaneuf said she was against “giving what could appear to be leverage by this board to any individual.” Later, she emphasized that candidates’ advantage could be a deterrent to other potential candidates.

Given the small window, she was also concerned about the sensitivity of confidential information and documents for which the department is responsible.

Chair Bill Boland was concerned about the timing of the window during the office’s busiest period:

It’s probably the three busiest months of the year for the clerk’s office with the compilation of the census coming back, preparation for Annual Town Meeting, and then preparation for the annual election. So, to me, taking anyone in and trying to train them during that period of time will potentially take away from all of that work that’s going to be required of that department to get done.

Rooney argued that the board needed to be consistent and transparent. He pointed to the board’s history of soliciting applicants for open vacancies on elected boards.

Boland answered that in those instances the board had only two choices – leave positions vacant or hold a joint meeting with the board to appoint a resident to fill the position. In town chief positions, where the board had a choice, they opted to appoint retired chiefs from other towns to fill interim spots.

Cimino argued that Jenkins would likely be there regardless of how they voted. He questioned why they shouldn’t add another interim clerk to the busy department. He was skeptical that training an interim person chosen by the board would cause more work, rather than adding another “able bodied” person.

Rooney also argued that the Town made clear at Annual Town Meeting that they wanted an elected resident in the position. From the audience, Desiree Aselbekian commented that she heard Town Meeting voters as clear that they didn’t want the Town Clerk to be an appointed position by the Town Administrator or BOS. She argued that appointing an interim candidate would be the opposite of what voters wanted.

Aselbekian supported Jenkins as being responsible for the department, as Assistant Town Clerk.

Phaneuf stated that she had heard from several people who were interested. She thought they were all great candidates. But she wasn’t sure people understand that becoming Town Clerk requires quitting committees and stopping work on other governmental projects. The board would then be in the position of filling another vacancy. She believed that anyone interested in becoming clerk should use that 90 day period to wrap up the work they are doing.

In the end, Cimino was swayed to vote with the majority. Rooney voted against, with a clarification that he was opposed to the process, not to Jenkins.

Updated (1/7/15: 4:32 pm): I know perfectly well that the only female selectman on our board is Bonnie Phaneuf. So, I have no idea why I typed Dorothy, and didn’t catch the error. I’m blaming it on my lousy cold. My apologies.