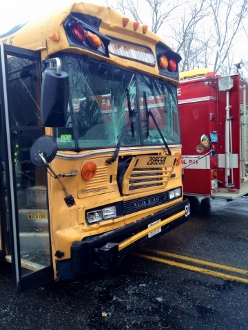 Left: The only injuries reported in yesterday’s ARHS bus crash were to the buses themselves. (Photo from Westborough Fire Department Facebook page)

The Westborough Fire Department posted that no one was injured. But several back windows on one bus were shattered.

Pictures from the scene shows the smashed front of the other bus.

Posting the pictures to their Facebook page, the WFD warned that conditions were icy.

Fire Capt. Patrick Purcell said both buses were en route to Southboro when the accident occurred at 2:12 p.m. According to Northboro-Southboro Regional School Superintendent Christine M. Johnson, the rear-end crash shattered windows on one bus. . .

“Firefighters and paramedics came and evaluated both bus loads with school nurses. Everyone was found to be uninjured, and another bus was called to transport the children home,” Capt. Purcell said. . .

“The impact of the rear-end collision caused the emergency door system to be activated and several windows located at the back of the bus to shatter,” Ms. Johnson wrote in an email. “Administration and our health care providers were on the scene, which is consistent with our practice whenever we learn of any incident involving our buses.”

*To be precise, the WFD reported that there were 33 people, including the two drivers. So, I’m making a safe assumption.