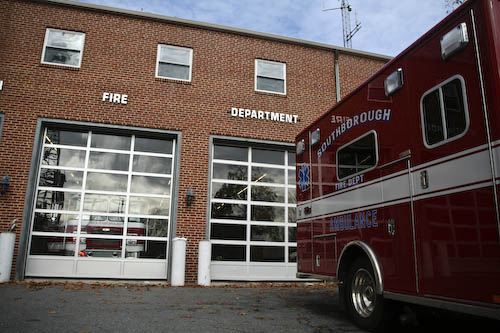 Above: The subject of how to make best use of the current Southborough Fire Station was raised again at this week’s Board of Selectmen meeting. (Photo by Susan Fitzgerald)

At their Tuesday night’s meeting, selectmen debated the best way to move forward exploring a new public safety building. In the end, they voted to create two committees: a Public Safety Study Committee and a Standing Building Committee.

The Public Safety Study Committee is charged solely with “the study and evaluation of the existing Police and Fire buildings, and exploration of future options for our public safety facilities.” (Scroll to the bottom for the Town’s full official charge, or click here to open the pdf.)

The Standing Building Committee will look at the bigger picture for Town buildings and property.

Selectmen want to evaluate the appropriate use of buildings, including how public safety buildings fit in. A specific “charge” for that committee is still to be drafted.

The subject of the second committee arose when Selectman Bonnie Phaneuf objected to the focus of the Public Safety Building Committee.

She worried about ending up with “buildings that are not appropriately used because we haven’t figured out all the pieces that go with it.” She also said, she’d like to “get some of the old committee members back involved. They’ve done an awful lot of work. Ten years worth of work that shouldn’t be lost.”

Selectman Paul Cimino agreed with getting a better handle on all of our real estate assets. “It’s something that we as a Town need to do. And by definition, if we need to do it, then just get a group of people together and do it.”

One idea Phaneuf wants a committee to reconsider, was building a new Fire Station and repurposing the current one into a Police Station. She said the two departments “don’t need to be joined at the hip”.

Selectman John Rooney worried about broadening the charge to be overwhelming. Selectman Dan Kolenda didn’t want to continue to push off an issue that has long been a priority for the board. And he believed that the public safety committee would consist of people drawn to it by their expertise in public safety.

The vote was split, 3-2, on forming a separate Public Safety Building Committee. With that approved, all selectmen agreed on approving the second committee to study the broader problem.

Selectmen will now be seeking volunteers for both committees. The Public Safety Committee will be comprised of seven members, including the two chiefs, the Town Administrator, and a member of Advisory. Selectmen also need to appoint three “Citizen-At-Large” positions.

The composition of the Standing Building Committe is yet to be discussed.

In the same meeting, selectmen reminded the public that the Town has vacancies on other committees that still need to be filled. Anyone interested in applying for appointment to a Town committee, can click here for an application.

Any new commissioned studies by either committee would first need funding approval by Town Meeting voters.

Below is the approved charge for the Public Safety Study Committee

The Public Safety Study Committee shall be made up of seven (7) members, all appointed by the Board of Selectmen, as follows: Police Chief, Fire Chief, Town Administrator, One (1) member of the Advisory Committee, and Three (3) Citizens-At-Large. The three (3) Citizen-At-Large positions shall be filled by residents of the community who are willing to volunteer their time in assisting with the study and evaluation of the existing Police and Fire buildings, and exploration of future options for our public safety facilities.

The Public Safety Study Committee shall be appointed in January 2015, and shall perform the work as detailed in the charge on or before the April 13, 2015 town meeting. The Committee will be expected to provide periodic reports of their findings and recommendations to the Board of Selectmen prior to April 13, 2015. It is the present intention of this Board of Selectmen to maintain the Committee throughout the term of any building project that may be undertaken as a result of their work. Appointments will be for one year terms.