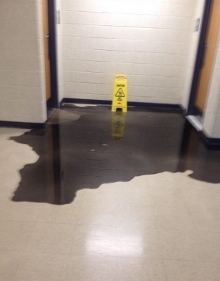 Right: The Harbinger tweeted this pic of mess caused by a burst sprinkler pipe at ARHS yesterday.

Looks like I missed a bit of excitement over at our high school yesterday.

The extreme cold caused a sprinkler pipe to burst at Algonquin Regional High School yesterday. The incident apparently set off fire alarms, forcing students to evacuate into the bitter cold.

Northborough Firefighters responded and helped clean up the mess.

Northboro Fire Capt. Robert P. Theve said a sprinkler pipe burst in the girls room near the school auditorium, flooding water into the bathroom, the hallways leading to the rotunda area of the school and the auditorium.

Capt. Theve said a significant amount of water poured into the building before firefighters were able to shut down the system. Ceiling tiles in the bathroom were damaged and there may be rug damage in the auditorium. He said firefighters helped with the cleanup, sweeping water down the hallways and out a door.

The article includes a great pic of the crew cleanup in action. Click here to see.

The school paper, The Harbinger, tweeted news and photos as events unfolded:

Back in business, with an extra crew onboard tonite putting the school back in shape, ready to go tomorrow pic.twitter.com/M9wSnyq6O5 — Tom Mead (@teammead79) January 8, 2015