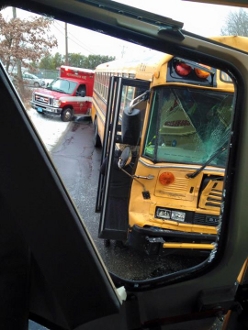 Left: Tuesday’s ARHS bus crash resulted in shattered rear windows in one bus and front end damage to the other, but no injuries. (Photo from Westborough Fire Department Facebook page)

According to the Patch, Westborough Police cited one of the drivers for “failure to use care and caution in stopping, as well as failing to keep 100 feet away from a school bus”.

One bus stopped to allow a student off at Chauncy Street when a second bus behind it collided into the back end, said police. The second bus sustained significant front end damage.

Both buses were filled with students headed home from school, and were checked out by the school nurse as well as the Westborough Fire Paramedics, who determined there were no injuries. All the students were transferred to another bus or sent home with parents at the scene.

For the full story by the Northborough Patch, click here.

On Tuesday, police posted that conditions were icy. And earlier reports from telegram.com also shared that the buses were Southborough-bound, and several windows in the lead bus were shattered by the crash.

The telegram.com report included a response from a member of the Regional School Committee, who stated that the bus contract is currently under review. Click here for that story.

Very sad to hear about this accident but it doesn’t really surprise me. I’ve complained about speeding school buses in my Southborough neighborhood for years now and nothing has ever been done!

Why is a Southborough bus making a stop in Westborough to drop some one off?