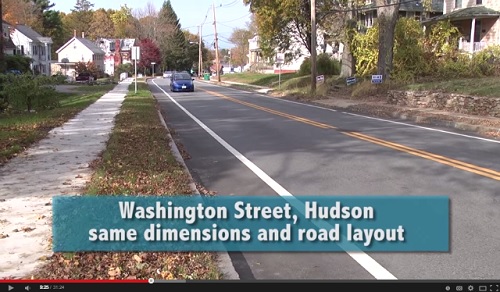 Above: In November, the DPW released a video update showing changes to the plan since the MassDOT project hearing in June. Here, a street in Hudson is shown as an example of the the planned layout for much of the road. [Note: the sidewalk composition may be different. It is currently planned as asphalt, but that’s a detail to be finalized at a later project stage.] (Image from video posted to You Tube by Southborough Access Media)

January 28, the Massachusetts Department of Transportation is coming back to Southborough. The agency will hold a meeting on the Main Street reconstruction project.

(Given the response to the Working Group’s most recent presentation, you can expect this meeting to be more positive than the last time MassDOT came to town.)

This will not be a public hearing to solicit feedback, like the meeting held last June. Instead, it will be an “informational meeting” on the project. Their stated purpose is:

All views and comments made at the meeting will be reviewed and considered to the maximum extent possible.

The meeting will be held at 7:00 pm on Wednesday, January 28 at the Southborough Senior Center, at 9 Cordaville Road.

You can read the full official notice here.

Looking for a refresher on the project? Here are some helpful links: