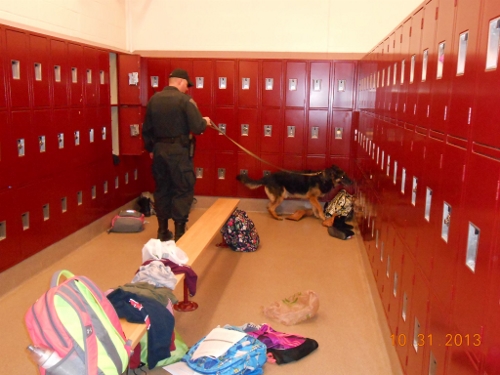 Above: In 2013, Northborough Police shared photos from their drug sweep of ARHS. The school’s paper reports another sweep took place in December with results that pleased police and school officials. (Photo from Northborough Police Department Facebook page)

Today, the Harbinger posted news on a drug sweep at Algonquin Regional High School. The school paper reported that the sweep took place in early December.

It didn’t make headlines in local media, because there was nothing bad to report. The sweep was considered a success – not for finding drugs, but for finding not “much of anything.”

Although school officials declined to provide details on what exactly the dogs found, Principal Thomas Mead said that the investigation “didn’t find much of anything,” similar to the results of the two dog searches conducted last school year. Mead said that although a few students were questioned, the investigation showed that drugs were largely absent from school grounds.

“The overwhelming majority of our students understand that drugs don’t belong on campus,” said Mead. “I’m delighted that we have a drug free campus.”. . .

According to [School Resource Officer Jeremy] Trefry, all student discipline resulting from the search was handled by the school. Although police were involved in conducting the search, there was no police punishment.

“My goal isn’t to get kids in trouble,” Trefry said. “It’s to keep people safe. The goal is not to find drugs; it’s to have a deterrent effect and keep drugs out.”

Are you kidding me??? They are largely absent because the searches are usually announced and kept to certain areas. Those with drugs keep them with them. All the kids know where the drugs are and who to get them from. If the school wasnt so afraid of repercussions they would do a REAL drug sweep and arrest those with the drugs. There are kids who don’t go to the bathroom all day long because of the drug activity in there. How sad that the administration sees this as a good thing instead of the sham that it is. They need to open their eyes and fix the problems up there instead of fluffing them off and patting themselves on the back unwarranted.

You do yourself and your message a disservice when you make generalized criticisms of the school and by extension, the students and faculty. I stifled a laugh when I read your statement ” How sad that the administration sees this as a good thing instead of the sham that it is.” Clearly you have not met the assistant principal Mel Laughton. He’s the older man with white hair who some of the kids says looks a bit like Col Sanders form tv commercial. He makes a pit bull look tame!

If you have any specific information that you can share that would make the schools better or safer, please share it with Mel Laughton.

Just Curious – I think the truth is somewhere between you and Momof2. Mr Laughton is certainly good at what he does, but that does not mean all stones are turned over. Do you honestly think high school kids are going to rat on what locker to look into? Let’s not kid ourselves.

Just based on kids being kids, I would be shocked if there were no drugs at ARHS or any other high school. Second, for whatever reason, the kids who use drugs somehow find the other kids who use drugs and often the non-drug users are oblivious to the drug users around them. At least that has been the experience that my kids have encountered at ARHS. Third, yes, some kids would report others using drugs.

Regardless, if Momof2 or anyone has any specific information or suspicions based on unusual behavior, just tell Mel Laughton. That might just save some young person’s life.

Algonquin is an awesome school. My straight laced senior has never talked about any drug activity in the bathrooms. You make it seem like it’s a free for all. I have worked in many school systems and an tell you Algonquin is doing an awesome job. They address issues that come up with individual students with the utmost respect. My older son was not straight laced…How sad that people purport to know all, when they really don’t. Thank you ARHS for doing an awesome job.

I too am the parent of a “straight laced” senior, who respectfully disagrees with you, Anne. He was informed that the odd smell coming from one of the bathrooms was “weed.” He thought a skunk had gotten into the building somehow! I have two college-aged kids who also attended Algonquin and they were aware of drug activity in the school, both during the school day and at school events.

I do think it’s great that Tom Mead is determined to stay on top of this issue. The more attention paid, hopefully the less of a problem it will be.

I’ll state my agreement with Kate and disagreement with Anne. My straight-laced student does not use the bathrooms at school at all. Although apparently the ones right outside the upper school office are generally okay because they’re near Mel Laughton’s office. Students even go from the math corridor to use those bathrooms, something like a 5 minute walk! I also tend to agree with Just Curious – this isn’t much different than when I was in high school in the 1980s, and the non-drug users and drug users don’t generally associate with each other much. (We also just watched Breakfast Club with our junior a couple weeks ago! Reaction was interesting.)

Algonquin is no different now than it was when I was there in the early 1970’s. Of course, I don’t think any high schools have changed that much. If it’s banned, they’ll find a way. (We always did!)

I’m not sure it’s a good thing that Algonquin is “no different now’ than in the 70’s. It’s still not ok. If something’s banned its banned. If kids ‘still find a way’ then administration needs to find a way to keep it banned.

I’ve heard the same thing from my “straight-laced” student…kids know to avoid certain bathrooms because of drug use. (I would think the odor would be a big tipoff…)

Largely absent? What exactly does that mean? Did they find anything or not? I agree with John Kendall’s post above. The more things change…..

Clearly something was found. Although, at one point in the story, Mead referred to a drug free “campus”, there was also a reference to not finding “much of anything”. And the article stated there was internal discipline of students resulting from the search.