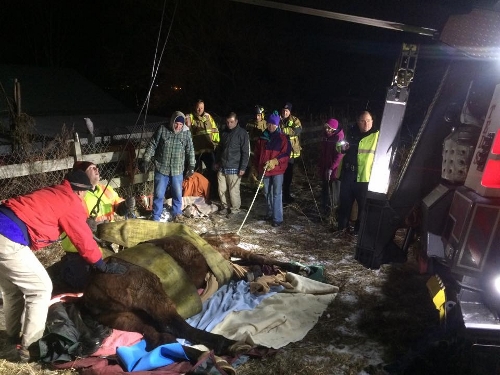 Above: Ted’s of Fayville towing joined a vet and Southborough police and fire personnel in the rescue of a horse in danger. (Photo from SFD’s Facebook page)

As I shared yesterday, a rescue team came to the aid of an elderly horse who had a bad fall Wednesday night.

It was a frightening incident for the horse and owners. But it had an uplifting outcome, thanks in part to a town towing company.

Southborough Wicked Local followed up on the rescue with more details:

Many came to the rescue of a 32-year-old retired race horse that slipped on ice Wednesday night and could not get up — until a tow truck arrived. . .

Firefighters were called to 16 Stowe Road at 5:15 p.m. after the standard bred horse named Super Tuesday slipped while walking inside a paddock at Hidden Stables. Her owners, Annette and Paul Rodier, were by her side. . .

After an examination from a veterinarian, the Ted’s of Fayville tow truck lifted the 1,200-pound horse to her feet using straps. While suffering from minor hypothermia, Tuesday was uninjured, [fire Lt. Neal] Aspesi said.

“She was a little wobbly at first,” he said. “But once the horse was up it was able to walk to the stable on its own.”

“We are surprised she walked out of there,” Rodier said. . .

“She went outside today by herself,” Rodier said. “She is outside enjoying the day.”