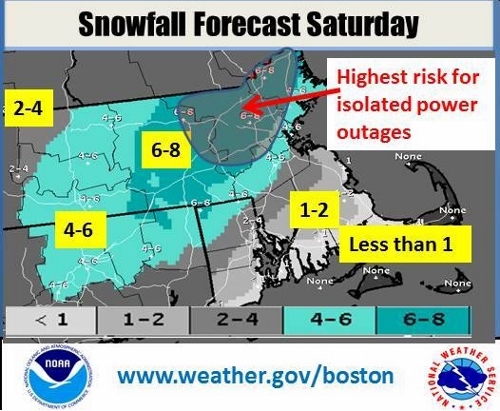 (Image posted to Facebook by the U.S. National Weather Service)

As cold as it has been recently, it still hasn’t felt like winter to me. Where’s the snow?

According to the National Weather Service, that’s about to change. The NWS is predicting 4-8 inches of snow for Southborough on Saturday.

While they aren’t expecting widespread power outages, we are in their “highest area of concern” for isolated ones.

The snow is slated to start early tomorrow morning and last all day tomorrow. In the middle of the storm the snow is expected to be wet and heavy, combined with some sleet and possibly freezing rain. Also expect gusting winds tomorrow.

For the timing of snow arrival, click the map thumbnail to enlarge.

As of this morning, NWS’ detailed forecast for Southborough is:

Tonight: A chance of snow, mainly after 4am. Increasing clouds, with a low around 27. Calm wind becoming southwest 5 to 7 mph in the evening. Chance of precipitation is 40%. New snow accumulation of less than a half inch possible.

Saturday: Snow before 10am, then snow and sleet, possibly mixed with freezing rain between 10am and 3pm, then snow after 3pm. High near 33. Light and variable wind becoming north 5 to 10 mph in the morning. Winds could gust as high as 23 mph. Chance of precipitation is 100%. New snow and sleet accumulation of 4 to 8 inches possible.

Saturday night: Snow likely, mainly before 11pm. Cloudy, then gradually becoming partly cloudy, with a low around 25. West wind 11 to 14 mph, with gusts as high as 29 mph. Chance of precipitation is 60%. New snow accumulation of less than a half inch possible.

There are also a slight chance of snow showers expected late Sunday night into Monday morning.

The good news: We may finally have the right conditions for sledding this weekend and the Senior Center’s snow shoeing program next week.

WARNING: Never use candles during power-outages!! They are a very dangerous fire hazard. The Southborough Fire Dept & State Fire Marshal STONGLY urge against using them. Please have flashlights & extra batteries.