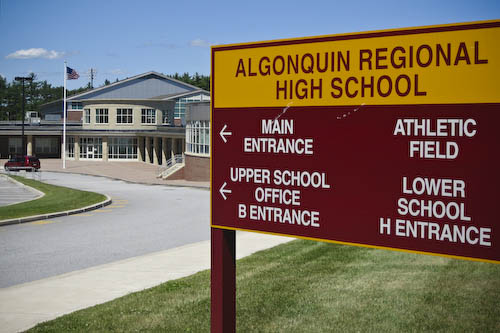 Some of you may not know about a legal battle between Southborough and Northborough over the high school construction costs. “Others may wonder, whatever happened with that?”

An article by telegram.com over the weekend informs us that the matter has finally been resolved. It’s a settlement that will cost Southborough taxpayers $1.7 million over several years.

The settlement stems from a dispute over how to split the expense of renovating and expanding Algonquin Regional High School.

In 2000, the towns  agreed to split the costs based on enrollment. In the midst of the ’01-’08 project, the state developed a new formula for splitting expenses, which included socio-economic factors.

Using the Chapter 70B formula, Northborough officials asked Southborough to pay about $1.5 million more. Not surprisingly, Southborough said no deal.

The dispute led to a compromise put in front of 2009 Town Meeting voters to split the difference. Northborough supported it while Southborough voters resoundingly rejected it. In 2010, Northborough voters approved $100,00 in legal fees to bring our Town to court.

In 2013, a judge sided with Northborough. There had been no public word since, including whether or not Southborough would appeal.

This weekend, telegram.com reported on the long-time coming resolution:

According to Worcester Superior Court records, a judge in January accepted a settlement that will see Southboro pay Northboro $1.7 million over five to eight years. Southboro will pay Northboro “market rate” interest over the course of the repayment, the records state. . .

The settlement represents an end to a complicated, longstanding dispute over state reimbursement associated with the $61 million renovation and expansion of the school. The project was done from 2001 to 2008.

In April 2013, Worcester Superior Court Judge John S. Ferrara sided with Northboro’s legal case, but left it to the towns to determine the exact amount owed.

Court records show the case has been slowmoving since then, with the towns in May of 2014 agreeing that Northboro was owed $1.7 million.

The article refers to a February statement by the Board of Selectmen. The BOS states that the court ruled against Northborough’s request for a lump-sum payment:

“(It ruled) the payback could occur over a period of eight years, which will allow Southboro to pay its obligation through retiring debt service, which will limit the impact on departmental operations.”

You can read past coverage of the dispute here.

So, 2009 Town Meeting voters – any voter’s remorse out there?

“The compromise proposed by the Regional School Committee — a split the difference approach — asks Southborough to pay $40K more per year for the next 17 years than they would under the Regional Agreement, for a total of about $680K. Northborough would pay $40K less per year.” MySouthborough, 11/23/2009.

See my April 2010 analysis (done for free!) in the comments at the link below. What did I know that the law firm later paid $50k+? by the town didn’t know, other than how to generate fees for itself?

Note, the Southborough town vote took place in April 2008. On June 28, 2010, when it should have been obvious this litigation would be a looser, MySouthborough reported:

“A week ago today, the Advisory Committee and Board of Selectmen met in a joint executive session to discuss strategy over the pending litigation with Northborough. They also voted to allocate some funds.

The Advisory Committee voted last night to transfer $50,000 from the Reserve Fund to the fund for special legal counsel, due to potential Northborough Southborough litigation,” Advisory Committee member John Butler wrote in an email after the meeting.

The Metrowest Daily News reports the next step is for the town to select a law firm to represent it.

(Selectman Bill Boland) said the process will begin once the town selects a law firm to represent them.

‘Our attorney will come up to speed on the issue and will then advise us how we should proceed,’ he said. ‘When Northborough (at Town Meeting) appropriated $100,000, it forced us to act.’

(Selectman John Rooney) said the town will choose an attorney by the time selectmen meet again on June 29.”

What was missing here was leadership. Leaders willing to get out in front and explain the cold, hard legal truth that the courts cannot ride to the rescue to enforce voluntary agreements once the feel-good politics of income and wealth redistribution take over.

At what point would it be legal malpractice if the attorney’s hired by the town either did not evaluate or disclose the horrible prospect for success of this litigation to the town leaders at some point?

Now that the case is closed, the town should disclose all legal advice received by the town from counsel to evaluate who should be held accountable for this debacle.

Yikes! After a little research, this story gets worse. Much worse!

I was trying to reconcile whether there were one or two “town votes” in Southborough, in 2008 and 2010, respectively. The record is kind of confusing, so I don’t blame Beth when she reports above: “The dispute led to a compromise put in front of 2010 Town Meeting voters to split the difference. Northborough supported it while Southborough voters resoundingly rejected it. Northborough voters then approved $100,00 in legal fees to bring our Town to court.”

In fact, it appears a second, 2010 vote was actually TAKEN AWAY from the citizens of Southbrough by their selectmen!

“The regional school committee asked each town to put the compromise on the warrant again this year, hoping for a better outcome from Southborough. But that’s not going to happen. Southborough selectmen unanimously decided NOT to put the issue before voters a second time. [emphasis added]

In a recent email to Superintendent Charles Gobron, Town Administrator Jean Kitchen wrote, ‘The Board felt that at last years town meeting the Southborough voters made it very clear that they were not interested in changing the regional school agreement on how the debt would be assessed.’

Those of you at town meeting last year will surely agree — the opposition to the compromise plan was resounding. At the town meeting, Selectman Bill Boland said he was ‘vehemently opposed’ to the plan, and voters agreed.’

Thus, not only did the Southborough BOS fail to provide the necessary leadership to advise voters that the litigation strategy was likely to fail two years later when more information and advice was available in 2010, the BOS in fact took the vote away from the people and substituted their judgment when more rational arguments were out there two years later! (See my 2010 MySouthborough comments that went uncontested.)

All of which makes the BOS’s misfeasance more egregious, especially if later the BOS was advised by counsel that the litigation had little chance of success and they didn’t act or go back to the voters with this information and advice.

Thus, don’t let anyone pin this $1 million Algonquin debacle on a vote taken of Southborough residents!

More than ever, the town should publicly disclose all legal advice received by the town from counsel to evaluate who should be held accountable.

But the point still holds that more information and advice was available a year later in 2010. Moreover, because they substituted their judgment for the voters, the BOS had an increased duty to go back to the voters if they were later advised by counsel that the litigation was a looser.

You are correct, I was mistaken when I said 2010 for town meeting votes. It was 2009. 2010 was when Northborough voted to sue Southborough.

Some time in there I wrote a column suggesting the towns make use of a state mediation service for community disputes like this. Much cheaper than lawyers and courts! It’s more than sad to think that two towns like ours can’t willingly get together to, as the favorite word goes, hammer out an agreement… maybe we should have locked some of these people in a room together until… …what an example for our kids!
And what a complete waste of town resources!
Sad. Sad.