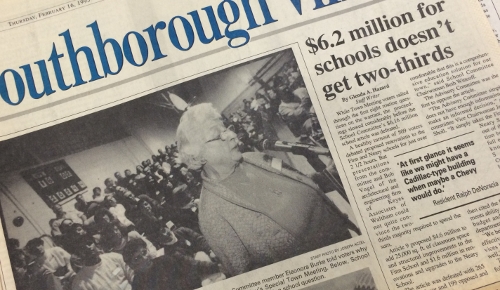 Above: The front page of the Southborough Villager, February 16, 1995

I’ve decided to reboot an old My Southborough series.

Back in the day, Susan took a look at old copies of Southborough Villager to see what the big stories were in years past. And of course, readers are encouraged to share their memories of the events.

I hope to make this a bi-weekly series. (We’ll find out soon if I bit off more than I can chew!)

10 years ago: A jump in served families in need

“$6.2 million for schools doesn’t get two-thirds”
At a Special Town Meeting, the School Committee sought $6.16 million to expand and renovation at Finn School, renovate Neary School, and study middle school options. The committee had been pushing to meet a deadline to apply for 63% state reimbursement. Opposition was concerned that the rushed project left too many unanswered questions. One point of contention was plans for the committee to come back later in the year with proposed construction costs for Trottier Middle School. The vote failed with a majority vote that fell short of 2/3 (265 yea vs. 199 nea).

Aging Algonquin Regional to get facelift
In the same issue, a planned $700,000 upgrade for Algonquin Regional High School was reported. That project would be put to voters at upcoming Annual Town Meetings. The article reported Principal Romeo Marquis explaining “The ceiling tiles are falling down, and the front doors look like those of a ghetto school.”

I’m sure that plans to fix up the school went smoothly. Right?

Either that, or Southborough battles internally for years about whether or not to pull out and build our own high school, only to end up battling Northborough for years over the regional school’s construction costs.

(Southborough Villager, February 15, 1985): Three lead stories from that week impacted the future landscape of our town.

“Ray Davis Will Discontinue Operating Orchard”
The leaser of the ton’s apple and peach orchard announced he was discontinuing operations. Davis appeared to point a finger at the Conservation Commission as prompting his decision to pull out of the lease early. The Commission would advertise for new bidders.

So, what happened between then and now? Did anyone else take over the orchard for a time? Or was that the end of it?

Is Breakneck Hill Farm part of the former orchard land? I’m fairly confident some of you can fill in that history gap for the rest of us.

(On a personal note, it looks like I got out of the apple picking business just in time. I believe that orchard is where I had my first after-school job months prior.)

“May Put Away Funds for Open Space”
The Planning Board was working to get an article in front of Town Meeting voters. The board proposed to create a “land bank”. It would allow the Town to purchase and preserve land for open space.

“Deerfoot and Skylar Residents Up in Arms”
Residents argued against a proposal to link a to-be extended Skylar Drive to Deerfoot Road. Residents of both neighborhood streets favored cul-de-sacs. Highway Superintendent John Boland argued for the connection. To residents of “isolated” Deerfoot Road, he responded, “I thought I was doing you a favor.”

Spoiler: A quick look at Google Maps confirms that cul-de-sac loving residents will win the day.

Bonus: 5 years ago on My Southborough:

2010 was a hard year for the town financially. So it’s natural to see that reflected in stories from that February.

Unsurprisingly a story about a (then and now) town official asking teachers to “give something up” prompted a lot of comments.

During a meeting in which selectmen were cutting town budgets left and right, Selectwoman Bonnie Phaneuf expressed frustration over the state of the school budget, which currently proposes a 3.63% increase over last year.
“Town employees have given up a lot in the past couple of years,” she said. “The school department has not stepped forward with their personnel.”

An even more heated exchange developed over a story on Police Department budget issues.

I lived in Southborough from 1972 (son was 5 & daughter – 2yrs. old) through 2006, when I then moved to New Hampshire to be near my daughter & grandson. I enjoyed this post if for no other reason to bring back memories of those mostly wonderfull years. I loved the town & still do. Miss living there so much. I hope you can keep this going.