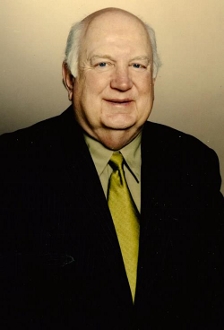 Alfred L. Connell of Southborough and formerly of Natick died Friday, February 13, 2015. He was the beloved husband of Elizabeth A (Hurley) Connell.

Born in Boston he was the son of the late William F. and Rose M. (Logue) Connell.

Mr. Connell was the proud founder and owner for 50 years of Connell & Curley Insurance Agency of Natick which he established in 1965.

Fred grew his business and invested in his hometown. He thoroughly enjoyed being part of the business community and worked to improve Natick and its downtown.

Mr. Connell was an avid golfer, and was a member of the International Golf Club in Bolton.

Fred most of all enjoyed people: meeting friends at a local coffee shop, having a chat at the office, a laugh on the golf course, or some fun with his family and friends.

Mr. Connell attended the Natick school system and graduated from Natick High School class of 1955, a graduate of Babson College and was a proud Veteran of the United States Army.

In addition to his wife he is survived by his three devoted children Kristen E. Connell, Karen E.V. Connell both of Southborough, Matthew A. Connell and his wife Lisa of Upton, his four cherished granddaughters, Julia Elida, Hannah, Elizabeth, and Maeve, his sister in law Agnes Connell of Brighton, many nieces and nephews and many dear friends.

He was also the brother of the late Bill F. Connell.

Relatives and friends are invited to attend the Funeral on Thursday February 19th at 10:00 A.M. from the John Everett and Sons Funeral Home, 4 Park Street at Natick Common followed by a Mass of Christian Burial in St. Patrick’s Church Natick at 11:00 A.M.