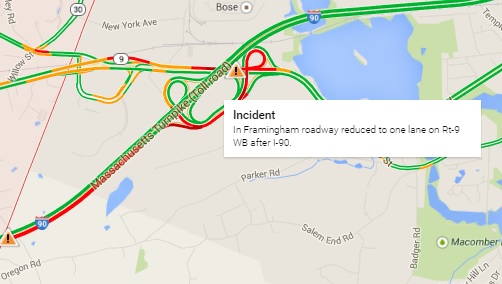 Above: Traffic sites this morning showed an incident that disappeared from maps and reports around 8:45 am. (Image from Google Maps)

Southborough Wicked Local reported on an accident that shut down the Route 9 Southborough-Framingham border. The incident took place last night, but effects continued during this morning’s commute.

CBS Boston tweeted around 5:30 am that the eastbound lane opened, but westbound was still closed. At around 8:30 am, traffic sites were still showing the incident with heavy traffic in the area. But shortly after, reports seemed to disappear, and red areas started turning green.

As for what caused the incident, SWL reported last night:

At 11 Monday night, Rte. 9 remained closed in both directions along the Framingham-Southborough line due to low-hanging wires and a downed utility pole near the roadway. . .

A large truck struck the wires, according to police scanner reports, and there are reports of power outages in the area.

A look at National Grid shows that less than 5 customers are still effected by a power outage. They estimate that fixed by 9:45 am.