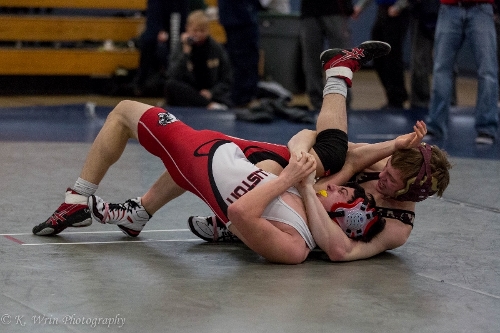 Above: ARHS Wrestler Austin Roche earlier this season. He’s one of the three team wrestlers headed to State this week. (Photo contributed by K. Wrin Photography)

The winter season ended for Algonquin Regional High School sports last week. But there are some still in the running for or headed to state championships.

Sports with individual competitors are ahead of the curve with some all-states already behind them.

Indoor Track didn’t make it to their state championship, but three of their runners of their members ran: Serena Hooker, Max Michaud, and Jacob Gore.

The Wrestling team came in 3rd at sectionals and 12th in their division this season. This week three of their wrestlers head to the all-state championship. Austin Roche, Nate Morrel, and Drew Cozzolino will wrestle at Salem High School. (So far the event is just listed as February 27th and 28th.)

The Ski team will race in the MIAA Alpine Ski Tournament tomorrow, Tuesday February 24 at Wachusett Mountain. Races start at 9:30 am.

Girls Gymnastics came in 9th at their sectionals on Saturday. They won’t be headed to state.

Team sports are just heading into division championships this week.

Boys Basketball didn’t qualify. But the 10th seed Girls made it. They head into their first round tomorrow at 7:00 pm. They face off against 7th seed Westford Academy. If they overcome the hometeam, they’ll go up against 2nd seed Franklin in the quarter finals on Friday.

Girls Ice Hockey is bottom seed for their 25 team division. They will compete in division preliminaries against 8th seed Falmouth. (Details TBD.)

Have a photo of your favorite team in action to share?

Updated (2/24/15): According to a wrestling mom, the team came in 3rd at sectionals, not 2nd as I had listed. (In my defense, MIAA listed the info incorrectly. Looks like they accidentally snubbed 2nd place Hopkinton, listing Algonquin as the sectional runner up instead. Nashoba was 1st place.) She also pointed out my typo in Nate Morrel’s name, now corrected. (Hmm, I just re-read the comment. To clarify, a “wrestling mom” is like a soccer mom, not a mom who wrestles. Though, I’m sure some would like to see that.)