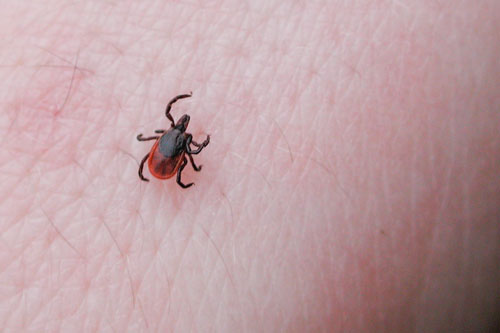 Above: Along with the greener pastures of spring (which will come eventually) come the dangers of illnesses from ticks. (Photo of deer tick posted to Flickr by s p e x)

It’s hard to imagine that’s spring’s around the corner. But I’m sure we’re all looking forward to lawns that are green instead of white.

With the joys of being outdoors in the springtime, come the dangers, too. According to a news release by Southborough Open Land Foundation:

Massachusetts and New England are among the areas in the U.S. that have the highest incidence of tick-borne Lyme disease. And there are approximately 300,000 cases of Lyme disease nationwide each year.

That’s why SOLF and the Board of Health are co-sponsoring a public presentation on Tick-Borne Diseases, including Lyme Disease. 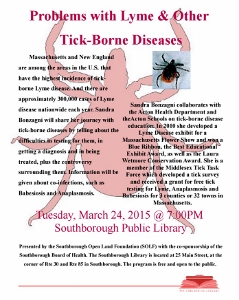 Speaker, Sandra Bonzagni will address issues surrounding diseases, diagnosis, and even the difficulties in getting treated.

“Problems with Lyme and Other Tick-Borne Diseases” will be presented at the Southborough Library on March 24 at 7:00 pm:

In this presentation, Sandra Bonzagni will share her journey with tick-borne diseases by telling about the difficulties in testing for them, in getting a diagnosis and in being treated, plus the controversy surrounding them. Information will be given about co-infections, such as Babesiosis and Anaplasmosis.

Personal and property protection for you and your family will be discussed, as well as deer management. There will be time for a question and answer session and handouts will be available.