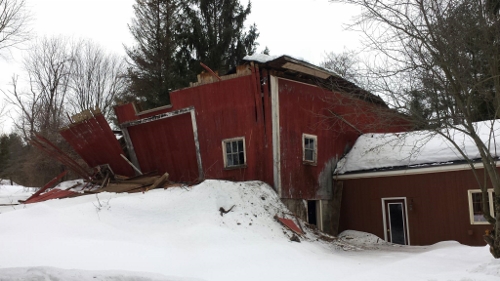 Above: The roof of an old barn in town collapsed this week. (Image posted to SFD’s Facebook page.)

For the past month, emergency management officials have been warning the public on the dangers of roof collapse. Yesterday, the Southborough Fire Department shared news on a collapse in town.

Luckily, the building was empty and no one injured:

On Wednesday March 4 the Fire Department responded to a home on Parkerville Rd, at the request of the Building Inspector, for a collapsed barn that was attached to a home. There was no one home at the time and it appears that the the collapse was a result of the accumulation of heavy wet snow on the roof. There was no further damage to the home but it was deemed uninhabitable due to the risk of further collapse of the unstable barn. The barn was well over 100 years old and the owner stated that it was in disrepair prior to the accumulation of snow which contributed to the collapse.

For more details, you can read Southborough Wicked Local’s coverage.

Recently, SFD shared pictures of their response to another house where owners feared potential collapse. Using the ladder truck, a crew of fire fighters investigated:

Given lack of follow up posts, it was probably a false alarm. But, reporting the concern is something Southborough Emergency Management has recently urged the public to do:

Hopefully, by now most homeowners have taken care to deal with snow related hazards. If you’re not sure, here’s one of the many recent warnings I shared on the blog.