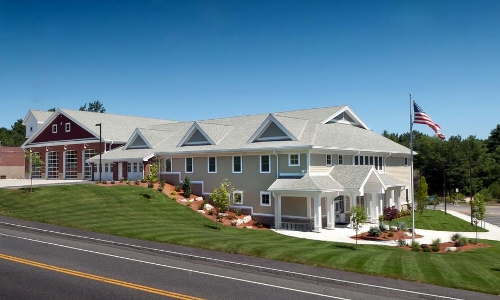 Above: SAM recently toured an example of the kind of public safety complex the Southborough Chiefs are purportedly seeking (Photo from Holden Police Dept Facebook page)

As I posted in February, the Town is moving forward on a project to evaluate Police and Fire buildings. A Public Safety Study Committee has already been appointed to look at the facilities and explore future options.

But the chiefs aren’t waiting for their report to take their case to the public. Both chiefs have been working with Southborough Access Media to publicize facility limitations.

Last month, I shared SAM’s video tour of the Police Station. Since then, SAM followed Chief Joseph Mauro for a tour of the Southborough Fire Station.

Mauro starts off with some history of the building. The Fire Station was constructed in 1979 on the site of former St. Peter’s High School. (The Police Station is inside the school’s old annex.)

Moving on to the current setup, the chief points out its short fallings. For instance, the main entrance requires visitors to walk the living quarters hallway before reaching the administrative office.

Downstairs, Mauro draws attention to limited capacity of the bay for storing trucks and equipment and working around it (to hook up the exhaust hose, suit up for a call, etc.)

Last week, SAM also posted a look at the Public Safety Building in Holden. According to SAM’s Executive Director Katelyn Willis, both chiefs recommended it as the type of building Southborough needs.

Police Chief David Armstrong led SAM through a tour of Holden’s Police Station in the lower level of the building.

Armstrong introduces his town as a community of close to 20,000 governed by a Board of Selectmen with a strong Town Manager charter.

The complex was completed in 2010 after 6-7 years of planning. It replaced a police station built in 1978 that was heavily hit by the 2008 ice storm. Approximately $15 million was set aside for the building. It came in about $2 million under budget, but those funds were “put back into the building.”