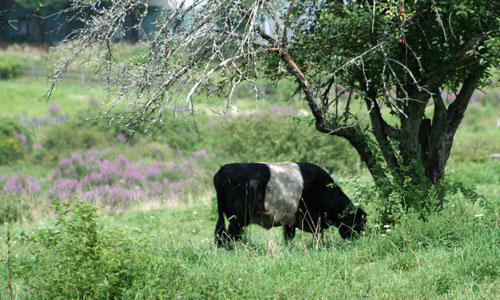 Above: A Beltie (aka Belted Galloway cow) grazes on Breakneck Hill conservation land in the summertime. Those grazing rights are up for a vote tonight. (Photo by Susan Fitzgerald)

A couple weeks ago, I posted that the Stewardship Committee and Conservation Commission would be voting tonight on a proposal by the Breakneck Hill Cow Fund. Since then, one committee has already cast their votes.

Southborough Wicked Local reports that the Stewardship Committee voted on March 27th to support the plan. That leaves the final determination in the hands of the Conservation Commission tonight.

The lease for use of cow pastures on the conservation land is ultimately the responsibility of the Conservation Commission. But as their name suggests, the Stewardship Committee are stewards of the land. So they are expected to weigh in with an opinion.

At issue this spring is how to handle the overlap of wetlands and cow pastures at Breakneck Hill.

In past years, the fund had believed that it was exempt from requirements to stay off of the wetlands. That was a misunderstanding. Now the boards are trying to resolve how to balance protection of wildlife on the land with providing enough grazing to maintain the beloved Belties.

The main pitch from the Cow Fund was a request to use additional upland pastures to replace the wetland areas.

At a previous meeting in mid-March, Stewardship and the fund were in disagreement on some terms. The fund claimed that by keeping cattle off the land between June 1 and July 15 would be sufficient to protect ground nesting birds. SWL reported that the committee chair believed another 16 days was necessary.

The Conservation Commission’s agenda schedules a discussion on the plan and vote on the lease for 7:00 pm tonight in the Town House 2nd floor meeting room.

I read on the Breakneck Farm website that the angry discussion between the Stewardship Committee led by Freddy Gillespie and the farm has resulted in this being the last year of the cows. This spring they are going to be sold for meat. This is a tragedy.

I hope the handful of people will take great pleasure in looking at the nests left by the birds.

After my post, it appears that the BHCF blog has been updated with something along those lines. But to be fair, Freddie Gillespie’s name isn’t mentioned. The only reference to the committee is “he toxic relationship with the stewardship committee chairman.” The chairman is Jim Gorss.

As a resident of our fair town, I do enjoy watching the Beltie cows as they gaze on the clover and grass in the pastures manage by the Stewardship Committee and under the auspices of the Conservation Committee. The Belties add a distinct flavor to our town as a reminder of our agrarian past and a source of enjoyment to all residents. Use of this pastural conservation land is in dispute and the ‘uncertainty’ as to how this matter will be resolve by the town and state? has led Mr. Bourdon to decide to discontinue operations, harvest the cattle for beef, and thereby eliminate the herd. Wow, what a tragedy. I would ask Mr. Bourdon to postpone his decision, and give the land use/conservation matter some more time to be resolved before slaughtering the herd and folding up the Breakneck Hill Farm cattle operations. If that occurs, its just another milestone event in transforming the character of our town from a truly rural feel to just another suburban sprawl. We should perhaps consider changing our town’s name to West Framingham and be done with future disputes.

The proposal put forth by Mr. Bourdon (limit grazing time to protect ground nesting bird population between July 1-15th) seems reasonable. Stewardship Committee Chairman Jim Gorss counter-proposal also seems reasonable to extend the limited use period to July 1 – Aug 1. I don’t know how the political dynamics play into the major decision to stop operations altogether, but seems like a compromise (based upon reliable scientific data) could be reached. I hope Breakneck Hill gets the land needed to maintain its herd and hope a compromise can be reached. is it possible or are there other ‘over-arching’ (read: personal or political) issues not being disclose. C’mon folks, its for Bessie the Beltie!

“… Under the plan, the cow fund proposes to use land that has been protected for ground nesting birds. Paul Bourdon, president of the fund, said research shows the land can be grazed in a bird-friendly way if not used between June 1 and July 15. Stewardship Committee Chairman Jim Gorss disagreed, saying the land shouldn’t be used until Aug. 1 because of the bird habitat. …” see http://southborough.wickedlocal.com/article/20150402/NEWS/150409193