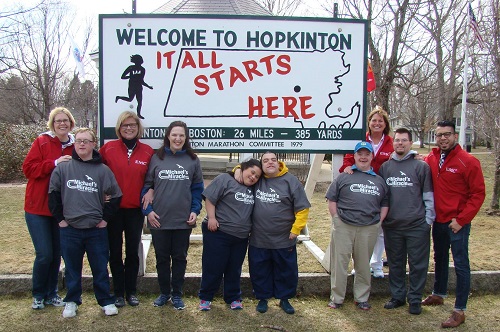 Above: Another Southborough resident is raising funds for the Michael Lisnow Respite Center. The center relies on Boston Marathon fundraisers for a third of its annual funds. (Photo from charity’s Facebook page)

Today’s feature focuses on Mike Campbell who is the second of two runners in town raising funds for the Michael Lisnow Respite Center.* The non-profit “provides daycare, after school care, and weekend services to children and adults with all ranges of disabilities.”

Campbell explains the importance of the cause:

If you have a child with severe disabilities, there are no such things as “taking breaks”. The demands on a family are unimaginable. The money we are raising is for those families that can’t afford to pay for the care at the center. 100% of the pledges you donate go directly to these families!

Lots of charities can raise millions of dollars and are certainly great causes, but the Respite Center is different. It is a small group of people trying to make a difference for a lot of people and their families and this is their only real fundraiser. By donating, you can make a difference. . .

Going to the Respite Center makes me realize how lucky all of us are, and how much we take for granted every day. I know that trying to run 26.2 miles is going to be grueling, and there will be many times that day that I will want to give up. But, I won’t, and I can’t because all the people who are going to the Center would give anything they could to be running even one mile. I am not running for me, I am running for them.

To support his fundraiser or learn more, click here.

*In an earlier post, I shared the fundraising information for Greg Mertz, also raising funds for the cause.

Good Luck, Mike! I hope you have a cool breeze at your back the whole way!!