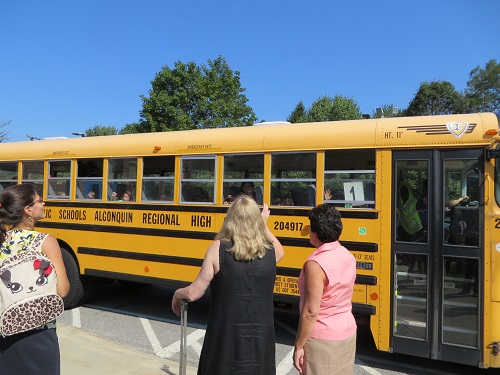 Above: Parents and school staff wave on Kindergarteners taking a practice bus run at orientation on the first day of Finn School. In the future, orientation will take place the evening before school’s start. (Photo by Beth Melo)

At last week’s School Committee meeting, there were some updates worth sharing related to Kindergarten next year.

Recently, parents have been asking the school to look at funding “free” full day Kindergarten. The district was looking into taking advantage of a state grant for full day to help offset the increased cost to town taxpayers.

Apparently, the school already receives state grants for the current Kindergarten program. But that funding is now in jeopardy.

Last Wednesday, committee members learned that that the Governor cut the grant from the budget. The school was expecting to receive over $66,000 next year.

Johnson hopes legislators can help reverse the cut. She told the committee they already have support from Representative Carolyn Dykema. The issue will be among the legislative priorities they address when they make their annual trip to the Hill on April 29. (You can expect unfunded mandates to be another top priority.)

The annual trip is for educators from across the state to conference with legislators. Johnson will attend, likely with several members from district school committees.

No mention was made as to how the funding cut could effect efforts to consider adopting “free” full day.

The other item of interest was a change planned for Kindergarten’s start date this fall. Beginning this year, Kindergartner’s will start the same day as other grades. In past years, the newbies started school a day late.

Previously Kindergarteners would come in with a parent/caretaker for a brief orientation on the first day. At the end of the orientation, kids get on a school bus for a quick run around the block.

The second day of school then acted as the little ones’ first.

Principal James Randell asked to move that orientation to the evening before this fall. His intent is to get Kindergartners settled into school quicker.

The orientation will be staggered with Woodward School’s orientation/curriculum night held the same evening.

According to next year’s school calendar, that first day will be Tuesday, September 1. Orientations will take place the evening of Monday, August 31.