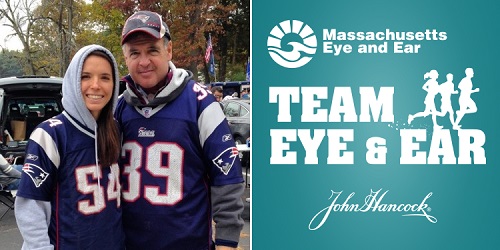 Above: One of Southborough’s runners this Monday is honoring her father who lost his personal battle this month, while she supports the ongoing fight against cancer. (Images from Fundraising page.)

It’s a deeply personal cause. Earlier this month, Karis suffered the loss of he father, Jonathan Karis, in whose honor she is running.

From her fundraising page (written prior to his death):

Cancer isn’t fair. Cancer doesn’t need a reason. It chooses its survivors without an explanation as to why.

In September of 2012 my dad was diagnosed with cancer in his larynx. As an otherwise extremely healthy, active, 56 year old non-smoker, the reasoning for his diagnosis was “bad luck.” As a junior at Colby College studying in Spain at the time, the concept of my dad having cancer was more foreign than anything I experienced abroad.

In the following two years my dad underwent 8 endoscopic surgeries to remove a small but reoccurring tumor in one of his vocal cords. Each time it was removed dad would be ok for a few weeks before the all too familiar tickle in his throat returned. He went through chemotherapy and radiation (throughout which he continued to work and exercise beyond anyone’s comprehension) however, the cancer didn’t cooperate and his surgeries became a regular occurrence.

In August of 2014 it became clear that this problem wasn’t going away easily.  . .

My dad had no choice in where, when, or why cancer hit him. But the rest of us get to choose how we support those who have “bad luck” and their journey to become survivors. Please help me as I raise funds for Team Mass. Eye and Ear and support them in their continued fight against Head and Neck Cancers. (read more)

Good luck, Kirsten. I’ll be thinking of you and your dad on Monday.

Kirsten,
You are in our thoughts and prayers. What a strong spirit of hope and courage you demonstrate by running in the marathon for a good cause. Your Dad would be/ IS son proud. May the SPIRIT fill your heart and kindle in you a fire that will ignite your body and help your perseverance to reach your goal.

Diana and the RCIA community at St Ignatius parish