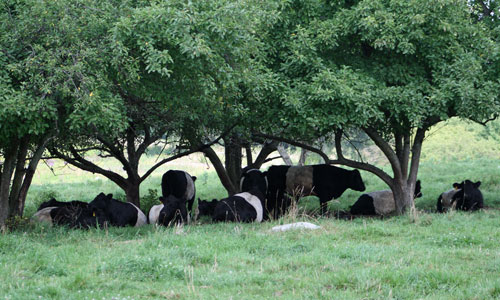 The Breakneck Hill Cow Fund asked supporters to join them at a public forum yesterday. They were looking for people with creative but realistic solutions and a desire to volunteer.

Southborough Wicked Local covered the meeting. According to the story, twenty residents and officials showed up in support.

Organizers explained their need for farm hands to support their work. Supporters offered suggestions for how to recruit and use volunteers. In turn, Cow Fund organizers stressed the need for someone to coordinate any efforts.

Residents also suggested creating a fundraising site. Organizers told the group that they would still need a long-term source.

One selectman suggested voters may be willing to pitch in town funds if all other funding options were exhausted.

As a short-term solution, residents suggested setting up a page on a crowdfunding site, such as Kickstarter.

However, the fund is not concerned about money right away. The fund has about $5,000 in its checking account. The organization needs a long-term source.

The fund sells cows for meat but Bourdon said that sales have been “inconsistent.”

Ideally, the fund likes to have between 17 and 22 cows. The current heard has nine.

Bourdon pressed the need for farm hands and someone to manage volunteers to organize fundraisers.

Selectman John Rooney suggested having an article sponsored at Town Meeting to help pay for and sustain the fund. . . adding that the group has to show that it has exhausted all fundraising efforts before taking the Town Meeting route. . .

Paul Bourdon, the fund’s operations manager, said his biggest motivator for the project is giving people a better source for meat than a factory farm, which is where 97 percent of beef in the United States is produced.

I think it would be great if the town helped out. As a voter and long time resident in this town, I think we should try to keep a little of our history intact. We live over by Mary Finn school and we miss the cows that used to be at the farm over here.

I agree. We already subsidize this operation by providing free grazing on Town Land.

I like the cows but a cash subsidy for a private enterprise is not appropriate. I cant look a senior citizen living on a fixed income in the face and say I need more of your money for a private farm.

This is not an appropriate use of public funds.

According to the Cow Funds website, they are a non-profit group. I’m not sure what is technically a ‘private enterprise’, but I sure don’t consider this one. Their specific charter is simply to provide this service to the town, if they can’t sustain themselves without public funds, and the townspeople want this service, then this exactly the type of thing that is appropriate for public funds.

I will gladly look any senior in the face and tell them we need this money to keep Southborough the kind of place we all want to live in, again that is exactly what local tax dollars are for.

We will have to disagree. I think there are far higher unmet needs in our community including full day kindergarten and funding our unfunded pension obligations to mention a few.

Please explain how the cows keep Southborough the kind of place we all want to live in. I would like an affordable place in which to live. My taxes are through the roof with no end in increases in sight. (If my taxes only kept pace with inflation, they would be about $3K less than they currently are.) I believe that the cows graze on conservation land which will remain conservation land with or without the cows. I like the open space and the assortment of wild animals abundant in the town. A handful of cows don’t make or break the town. Folks that want the cows always have the option to fund them through charitable contributions, but they should not be part of our tax obligation.

I don’t know much about the finances involved or the complexities of animal farming, so perhaps it’s not possible…

But have they considered expanding operations, adding more animals, and turning it into a CSA? I know there are some other meat CSA’s in the region that do pretty well, and provide a good service at the same time. I’d love to support a CSA like that in Southborough.

Like I have said before, I like the belties but there is a basic problem. The business model does not work. Grazing on Town Land only supplies a modest proportion of the nutrition required for each animal and the grazing area is about to decline by 1/3.

The bottom line is that, according to the web site http://www.southborobelties.org/ there is a potential for $6000 per year in income (this is net income so I am not sure what it is net of) and $20,0000 per year in expenses. One way or the other the numbers do not add. If the property can, at best, generate 4 marketable animals, they have to sell at a gross price of about $5000 each to break even. I think that means that a “Live Weight” price of about $5.00/lb or a “Dressed Price of about $8.00/Lb.

Like I said, the numbers are not compelling. If $20k is really needed to sustail a herd of 10 animals then the subsidy will have to exceed the value of the meat by about 50%.

I belong to an organic meat CSA and pay $95 for a ten-pound dressed, packaged and frozen share every month. I know where my meat comes from and how it is raised. It is worth it to my family. Instead of paying $5 a day for a cup of coffee which is full of who-knows-what, I invest in healthy protein.

No disrespect intended, but it really isn’t enough to know how your meat was raised. The other huge part of the equation is how the animal was slaughtered. That isn’t advertised nearly as much as it should be. Many well raised animals have horrible deaths.

I do know, much more than in the case of grocery store meat, how my meat is slaughtered. My CSA makes that information available. In addition, I have come to know and trust the family (wife husband and three children) who run their farm themselves and treat their animals with great care and respect. I trust that they have their animals slaughtered in the kindest and most FDA-compliant means possible. I have also visited their farm myself. They open their farm twice a year.

We belonged to a meat CSA. We switched to Mass Local Food co-op. It too has local families who love their animals (many farms have a CSA but also participate in the co-op). It also allows us to get exactly the types of meats and other items that we want such as local cheese, dairy, vegetables, eggs, grains, etc. masslocalfood.org.

Are these cows gone? I just found out about their plight and have friend interested in taking them where he would use them to clear his land. He has some belted cows and was interested in these. 508-872-7549