This Friday, St. Anne’s parish will be holding a benefit for their sister parish in Haiti. By the sound of things, it should attract a different audience than the average church concert.

Organized by young members of the parish as a service project, the concert will feature young rockers and rappers.

The event opens at 7:00 pm with high school rock band Indignous. (The group already has a studio album under their belt. This concert will be recorded for a new live album.) 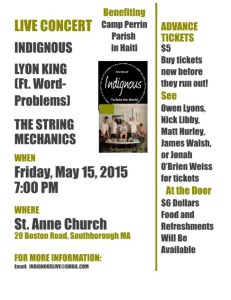 Next up will be rapper Lyon King. Part of King’s act feature rapper Word Problems.

Finally, parish intern Paul Reuter’s rock band String Mechanics will play. (An earlier incantation of the band was Rhed, which has played the area for a few years. They’ve had some changes to members including a new singer and the introduction of a viola.)

Tickets will be $6 at the door. (Or $5 in advance if you buy through one of the contacts listed on the flyer.)

If you have questions email indignouslive@gmail.com.

Just a thought, how about we keep the funds raised here and support our own people instead of running all over the world helping everyone else. We have poor, we have homeless, we have people who could really use a helping hand. God helps those who helps themselves, lets start helping our people. Nobody ever rushes to the aid of the U.S. (Katrina, Sandy, 911) however every single time something happens anyplace in the world, there we are sending millions of dollars. I get charity but charity starts at home.

I don’t see that their benefit takes anything away from others. I applaud their effort to help those less fortunate.

Whenever I see a charity effort that perhaps I’d like to tweak in one way or another, I think of an old quote:

“There’s not enough love in the world that one should question the form that it takes.”

So let’s not criticize a group that is doing something that is unquestionably a good thing. Let’s applaud them!

2.) Inarguably, the plight of people in 3rd-world countries is far worse than that of people in the US. Do you really think that Americans are automatically more worthy of our donations just by virtue of being born within the same borders as we were? Also, because of exchange rates, $5 to a Haitian charity goes a lot further than the same donation to an American one.

3.) “Nobody ever rushes to the aid of the U.S.” strikes me as a false dichotomy. Since when does nobody donate to American charities? Americans open their wallets constantly for the One Fund, the Red Cross, the American Cancer Society, and countless others, so I’m not sure how you reached the conclusion that we don’t help ourselves.

Thank you Beth for posting. This is an event organized by 15-16 year olds with the help of their Confirmation sponsor. I see only positives when a group of talented teenagers organize on a Friday night to raise money for a worthy cause.