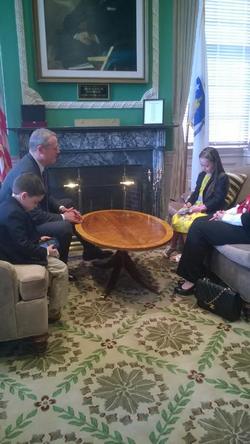 Right: The verdict is in – 2nd grader Shayna Rose is the most well connected reporter in town. Rose was up front for the Governor’s Boston Marathon verdict press conference and held a follow up interview. (Contributed photo.)

There’s a new reporter covering the local beat. But if you don’t have a child in her 2nd grade class, you probably haven’t seen her work.

The sit downs took place on the heels of the Boston Marathon trial verdict. Proud parent Chris Rose shared the news and origins.

According to her father, Shayna is outgoing but doesn’t enjoy running around. So, she began to feel left out at recess. She buried herself in a book, but teachers believed she should push herself to interact with other students.

Her parents were saddened that she was dreading recess every day. Then her mother came up with the newspaper idea. Shayna interacts with students while doing something she enjoys. And she’s gotten a great response from her peers.

Shayna interviews fellow students, school faculty, and has even featured a Southborough police officer and firefighter. She reviews books and movies and covers little league.

As for how she came to interview the Governor, her father explained:

Shayna and I watch the news and she saw the marathon bomber and Aaron Hernandez trial on TV. She took an interest and started asking me a lot of questions. I tried to explain on a 2nd grade level what these men had done and about the death penalty. She took a HUGE interest in it and wanted to write the Governor about the death penalty! We felt that was a bit heavy for a 2nd grader to be discussing but instead suggested requesting an interview.

They sent in copies of Shayna’s work and followed up with his office. Shayna’s tenacious grandmother continued to follow up with the busy governor and scored her a spot on his schedule. It turned out to be a significant date.

As we waited for the Governor to come out to meet us I could see something BIG was happening. Security and camera people and people with microphones were running all around us. Some people started setting up a stage with a microphone. The jury had reached a verdict in the Boston Marathon Bomber trial!!!! The Governor had to do an immediate press conference for all the newspapers, internet and TV stations! People were shuffling in and out and I thought for sure the Governor would have to cancel my interview!!! Instead the most amazing thing happened. A woman, who was the Governor’s Deputy Chief of Staff, came up to me and asked if I would like to be a PART of the press conference!!! Well of course I said YES and I took my mom’s phone to film it and off I went. We went past cameramen and past reporters and right up front!!

You can get her full scoop in her latest edition. Click on the thumbnails below to enlarge.

Following the interview, Baker’s press secretary introduced Shayna to reporter Janet Wu. She’ll be covering that interview in her next edition.

Oh my goodness. . . I LOVED THIS. Keep up the good work, Shayna! I look forward to part two!