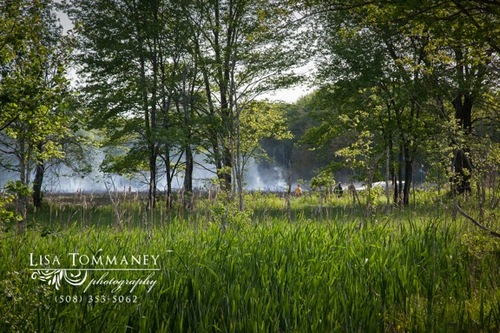 Above: There were a few brush fires around the area over the weekend – including at least two in town. This one took place along the Westborough line, near Fruit Street/Southville. (Contributed by Lisa Tommaney)

I can’t cover everything that goes on in town. Luckily, The Metrowest Daily News/Southborough Wicked Local has reporters covering our beat.

Most of the recent stories related to hearings/votes by town boards. Two are news out of last week’s Planning Board and Board of Selectmen meetings. The last two relate to items on this Wednesday’s Zoning Board of Appeals meeting:

A plan to build a new private commercial parking lot at Fitzgerald’s General Store on Southville Road is stirring up a bunch of neighborhood concerns linked to the MBTA commuter rail staion – mainly traffic and commuters parking on side streets. (read more)

Selectmen Tuesday night signed off on borrowing $3.6 million to start a long-anticipated project to replace an 84-year-old water main on Rte. 9. (read more)

After failing to find a buyer interested in preserving the historic Burnett House on Main Street, owner Jon Delli Priscoli has decided to seek zoning relief to open an 11-room bed and breakfast in the home and part of a carriage house on the property. (read more)

A deal with the developer of the planned 180-unit Residences at Park Central off Rte. 9 to help boost the town’s base of affordable housing is back on the table. (read more)