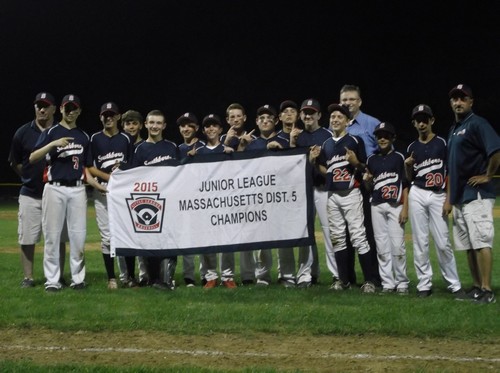 The team won its first sectional game against Brookfield/Brockton 8-4 on Saturday night.

I don’t have details. But a proud parent shared color commentary on their fight last week for District 5 champions. It culminates in an “extroardinary” winning run:

After winning two games against teams Charlton and Oxford and losing one to Auburn in pool play, the Southborough Junior League team advanced to a semifinal game against Sturbridge.

Though the game was tightly contested in the earlier innings, Southborough prevailed with clutch offense late in the game and defeated Sturbridge 11-3 on Monday, July 6. On the same day, Shrewsbury won a nail-biting semifinal game against Oxford 5-4.

Shrewsbury and Southborough advanced to the District 5 championship game on Thursday in Oxford. Shrewsbury began the game with a two hit first inning, but Southborough pitcher Gunnar Vachris managed to get out of the jam unscathed. Southborough also failed to score in the earlier innings.

In the top of the third inning, Shrewsbury strung together a couple of hits and took a 2-0 lead. Vachris continued to pitch to a potent Shrewsbury lineup, and only let up one more run on a sacrifice fly in the fifth inning. For Southborough, Jeffrey Secrist was the first to break up Shrewsbury’s no-hitter in the fourth.

It was 3-0 until the bottom of the fifth inning, when a single by Matthew Walsh scored the first run of the game. With runners on 2nd and 3rd base, a passed ball by Shrewsbury led to another run, scored by Greg Rosen. Walsh rounded third and scored the tying run in the same play due to a lack of communication by Shrewsbury.

Vachris pitched another shutdown inning in the sixth, and Grant Gattuso came in for relief in the top of the seventh inning and allowed zero runs.

In the bottom of the seventh inning with one out, Sean Cullen stroked a single to left field and Greg Rosen came up to the plate. Cullen stole second base and Rosen laid down a perfect bunt down the third baseline. A wild throw from Shrewsbury allowed Rosen to advance to second base as Cullen rounded third base and headed for home. The Shrewsbury first baseman made a perfect throw to the catcher, and Cullen, having no other option, leaped over the catcher to score the winning run in extraordinary fashion.

Their next game in the double elimination sectionals tournament is Wednesday night vs. Quincy.

Hi Beth,
Southborough is still very much alive in this state tournament. Since the last posting Southborough lost to Quincy on Wednesday, but we beat Swansea in Southborough last night. We play Quincy again, we need to beat them twice (Sunday and Monday) and then we advance to the State Championship! Pretty amazing for our little town!