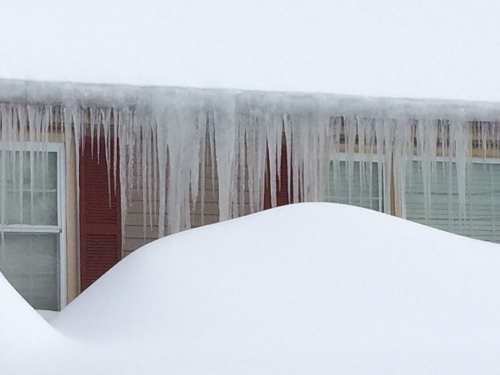 Above: A common site five months ago is hard to recall today. But the effects of this winter aren’t erased as quickly as melting snow. (And in some places, that melting, wasn’t so quick.)

In today’s heat, it’s hard to remember how deluged with snow we were this winter. But there are a few reminders that popped up for me this week that are worth sharing.

Draft minutes posted by the Advisory Committee from last week shed a light on the town’s expenses for snow cleanup this winter. The DPW’s deficit for snow clearing was $160,000.

That’s more than 50% more than was budgeted, with a total end cost of almost $460K. (According to the Town Treasurer, the original budget was just under $300K.)

The deficit exceeded the amount that was available in the Town’s Reserve Fund (after other town expenses for police, fire, etc) by over $60,000. The department, with approval from the Advisory Committee, was able to transfer the extra funds from their Personnel Budget.

Of course, the costs of winter don’t end there. The town is still dealing with road repairs related to the toll of winter. Fortunately, over $64,000 in pledged state funds should help with that.

Want a more visual reminder of our extraordinary winter? Here’s a tweet from the state yesterday informing us that Boston’s “snow farm” didn’t fully melt until yesterday:

Want to see the snow hill melt? Check out the video here. (It looks more like a shrinking mountain of dirt, but it’s still quite a transformation.)