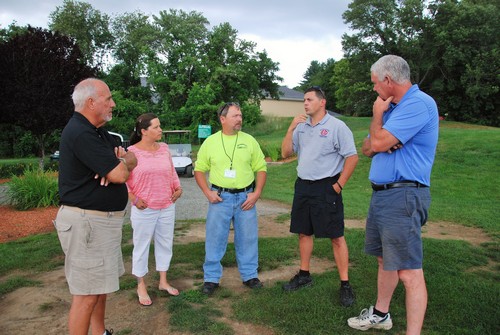 Above: SEM’s Neil Aspesi and volunteers from CERT/MRC/TeenCERT speaking with a representative of St. Mark’s Golf Club about donated lightening detectors. (Contributed photo)

Everyone knows that the middle of a golf course isn’t the ideal place to be in a lightning storm. Now, golfers will hopefully get the extra time they need to beat it to shelter before anything strikes a course in Southborough.

The personal lightning detection units are very reliable, although not without their limitations, and are designed to detect increased electrical activity associated with lightning.  The units can detect this activity from several miles away, providing that much needed time to take action and seek shelter, continuing to alarm louder and louder as the electrical activity gets closer. . .

Members from CERT/MRC/TeenCERT and SEMA hand delivered the units and met with representatives from each golf course on Tuesday, July 14, 2015. The meeting was used to conduct training on the operation and use of the units, and offer education on outdoor lightning facts, myths and safety.

Each year, in the United States, an average of 46 people die and over 200 are injured as a result of lightning strikes. It is well known and documented that golfers are at a high risk of lightning strikes due to the use of metal clubs and umbrellas, wide-open land, and lack of safe shelter. Adding to the threat, it is not uncommon for lightning to strike the ground distances as far away as 30 plus miles (in any direction) from the actual storm cloud.

So who are these do-gooders?

The volunteers of the Southborough CERT/MRC/TeenCERT work directly with the Southborough Emergency Management Agency (SEMA) supporting its’ mission to improve community safety, reduce injury and damage, and enhance the community’s ability to quickly return to normal functions following disasters and significant emergencies. The team is always looking to recruit new volunteers.

To find out more about the adult organizations, click here. To check out TeenCERT, you can take a look at their Facebook page here.