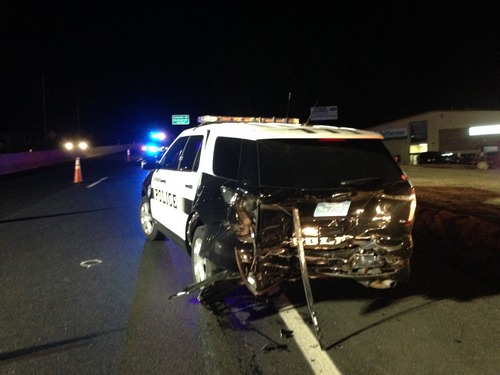 Above: This week, Southborough Police shared images from the wreckage caused in September by a driver now facing drunk driving charges.

Charges were filed this week against the driver who crashed into a Southborough police officer on September 15.

Officer John Woodford was rear-ended in his marked police cruiser on Route 9, while stopped while stopped with his emergency lights flashing. This week, Westborough Police released information confirming that the driver was intoxicated.

Ashland’s Theresa Meltzer was taken to the hospital for serious injuries the night of the crash. State police recently learned that Meltzer’s blood alcohol level was more than twice the legal limit.

Meltzer has been charged with DUI and operating a motor vehicle negligently. (A court date is TBA.)

Police Chief Kenneth Paulhus shared the WPD’s press release and photos from the incident. Click thumbnails below to enlarge.

The Chief feels fortunate that both of his men crashed into were back on full duty this fall. Officer Woodford only took a few days of rest at home.

Less than a month prior to Woodford’s crash, Officer James Gallagher was rear ended by a Southborough driver who was also charged for driving Under the Influence. Gallagher’s incident kept him home for about month of rest.