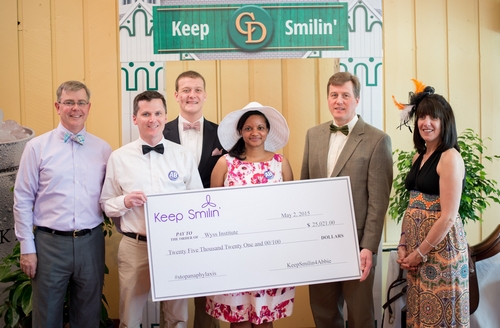 Above: The foundation donated $25,000 (and has scheduled giving $50,000 more) to help develop a wearable device to save lives. (Image from KeepSmilin4Abbie website)

I’ve posted in the past on the KeepSmilin4Abbie Foundation. Usually, the focus has been on a drive or fundraiser. Now, I have news to share on how funds raised are being put to good use.

The foundation was formed after the daughter of a Woodward teacher died from anaphylactic shock. In her memory, Abbie Benford’s family has been working to help others living with food allergies.

Yesterday, the Boston Business Journal covered some of the good work the foundation is doing:

with the help of the Wyss Institute at Harvard, the KeepSmilin4Abbie Foundation is helping create a wearable device that can identify the signs of anaphylactic shock before it is too late.

“People don’t have to die from anaphylaxis,” said Abbie’s father, Stephen Benford. “Fifteen million Americans are at risk. They are walking around with 100-year old technology … In hindsight, Abbie didn’t have to die. There is technology out there that can solve this. It’s important to me and my family to take this tragedy and make something positive out of it.”

With funding from the KeepSmilin4Abbie Foundation, created in Abbie’s honor in 2014, the eight-person team at the Wyss Institute is hoping to create a wearable device that could warn you you’re in anaphylactic shock, measuring a variety of signs from your body including heart rate, breathing rate, sweat, body temperature and blood pressure.

The story also provides more details on the tragic incident that serves as a warning. Abbie initially misinterpreted her symptoms. Then they progressed too quickly for the epinephrine to work.

That is what the Benfords and Wyss Institute are trying to prevent happening in others. For details, click here to read the BBJ full article.