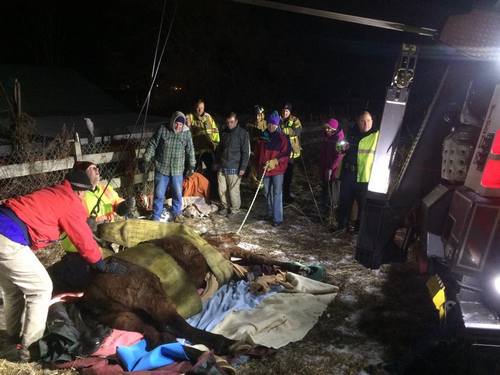 Above: An unusual customer for a town towing company was one of the incidents that made news across the state this year. (Photo posted by the SFD to Facebook)

My earlier post, a year in images, is a reflection of our small town life. But there were moments this year that made headlines for Southborough across the state and even beyond.

Here’s a look at the stories that captured the media’s interest in our town:

Lawsuit over wifi in the classroom

A law suit was filed on behalf of a Fay School student purportedly suffering from Electromagnetic Hypersensitivity Syndrome. Parents were seeking to lower the wi-fi signal strength.

Since the signal was purportedly well below standards, the suit seemed to be more about growing controversy over wi-fi in the classrooms than about the school itself. The news made headlines across the country.

St. Anne’s Church was disturbed by a hateful message written in chalk. The media attention grew when the church announced plans for an anti-hate vigil. A follow up message was scrawled on Boston Road in reaction to police labeling the message a hate crime.

Cub reporter on the prowl

Southborough’s Shayna Rose snagged some high profile interviews for a 2nd grader, and now 3rd grader. Her scoops have put her in the spotlight almost as much as the people she’s interviewed. Her most famous subjects were quick exchanges with presidential candidates Hilary Clinton and Donald Trump. But she’s had more in depth interviews with the Governor, a Frozen star and many more. (You can read about the rest, including Gronk, on her Facebook page.)

Southborough emergency personnel worked for hours to rescue a fallen horse. It was the critical assistance provided by a town business, Ted’s Towing, that captured media attention.

An investigation into a purportedly disturbing hazing incident at the school made headlines. Due to the involvement of minors, most details were kept under wraps. But administrators stated no students were physically harmed, and that hearings led to five ninth graders “leaving” the school.

Assault on first responders after crash

After a resident, under the influence, crashed into a police officer this summer, things got ugly. (That incident ended up in court earlier this week.)