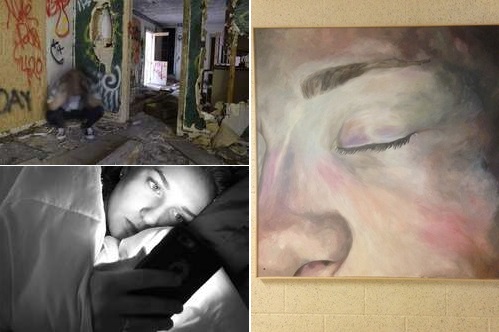 Above: Three of Boston Globe’s coveted Gold Keys were awarded to two Algonquin students for their artistic work. (Images from Gonk.Arts)

2016 has barely begun. But students in Algonquin’s arts programs have already accomplished a lot this year.

Four exceptional musicians from Algonquin will perform at Symphony Hall in March as members of the Massachusetts All-State Music Ensembles. These students received all-state recommendations after scoring high in their District Auditions. [In January] they auditioned for All-State and were selected to participate based on their audition results.

Poetry Out Loud (Finals and Semi-Finals)

The Harbinger, the school paper, tweeted the results from the “Poet-Hawks” competition:

The Globe announced the winners of its annual arts contests. Two Algonquin students received the Gold Key – an honor that was reserved for less than 5% of the 15,000 art applications.

Isabel Zaia won for her painting “Skin” and Marissa Orofice was honored twice for photography – “It’s Insanity, to Say the Least” and “Late Nights”.

Silver Keys were awarded to:

And a dozen other students received honorable mentions for art or writing. Click here for that list. (Or to look at the list of all of this year’s honorees throughout the state, including students from Fay and St. Mark’s schools, click here.)

Visit the Gonk.Arts blog to view a gallery of all the visual arts honorees’ work.

As part of the Town of Northborough’s celebrations, a program was held at the Northborough Historical Society on January 22nd. Singers from Algonquin’s Chorus entertained the audience.

Here is the video posted to YouTube by NCAT.