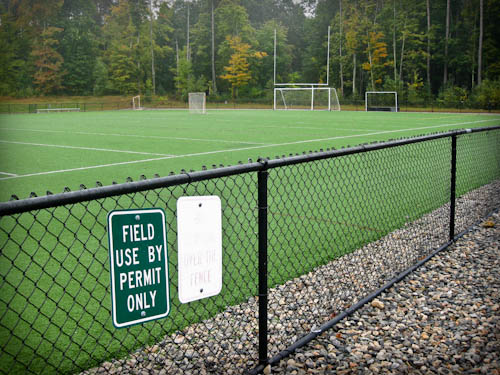 Above: Good news on the initiative to save 9-11 Memorial Field. (Photo by Susan Fitzgerald)

A state law has been passed allowing the Town of Southborough to lease 9/11 field for at least 15 years. It was the critical step in keeping the field open for use.

In 2013, Southborough Recreation announced that the turf field was reaching the end of its life. They planned to phase out the field’s use for recreation and sports.

Re-turfing the field is expensive. And restrictions on the state owned land made financing prohibitive.

One of the biggest hurdles was that the state would only allow the Town to lease the field for periods of 5 years or less. Meanwhile, long term financing requires a long term lease.

After news broke, youth sports organizers learned the loss of the field was going to have a serious impact. Lacrosse, soccer and even baseball would be competing for limited grass fields which some worry are already overused.

Jim Hegarty (a Lacrosse coach and now Town Clerk) spearheaded an initiative to save 9/11 field. He coordinated a plan with town leagues and Recreation would ensure that financing is covered by user fees – not taxes.

The efforts included articles passed at two Town Meetings and special state legislation with the help from Representive Carolyn Dykema.

Residents were also asked to participate in a letter-writing campaign to the State oversight committee. They were also reminded that the field serves as a memorial for September 11th.

Yesterday afternoon, Dykema’s office confirmed victory after the bill was signed into law:

An Act directing the division of capital asset management to lease a certain parcel of land in the town of Southborough (H.3762), a bill sponsored by Representative Carolyn Dykema and Senator Jamie Eldridge, was passed by the legislature the week of January 24th and signed by the governor on February 4, 2016. The land in question is the Southborough 9/11 Memorial recreational field located on Acre Bridge Road, a field which has fallen into disrepair after 13 years of use. The bill allows the Town of Southborough to lengthen their lease with the state from a period of 5 years to a period of no less than 15 years so the town can afford to bond the cost of replacement over a longer period of time.

The 9/11 Memorial Field is a multipurpose turf field most commonly used for youth sporting events, and at the field’s entrance the names of those with ties to Massachusetts who lost their lives in the September 11th, 2001 attacks on the World Trade Center and Pentagon. Opened in 2002, the turf field has been a favorite of young athletes and their families in Southborough and throughout the region. Its significance as a memorial gives it particular value to residents. The field has recently become structurally unsound and badly needs repairs, but there are environmental concerns that have necessitated careful planning that led to the creation of this legislation.

“I am glad that this bill was finally passed and that Southborough will now be able to make the repairs the 9/11 Memorial Field needs,” said Representative Dykema. “The memorial has a special place in the hearts of the Southborough community, and returning the field to playable conditions will help continue to honor the legacy of those we lost.”

“I applaud the Legislature for passing a bill that will make necessary improvements to the 9/11 Memorial Field which is actively enjoyed by Southborough residents,” said Senator Eldridge. “I thank Representative Dykema and Southborough town officials for advocating for the restoration of the field so it can be preserved and safe for residents to utilize for years to come.”

The bill’s passage reflects a successful partnership on the part of district legislators and town officials like Doreen Ferguson, the Director of Recreation, and Jim Hegarty, the Town Clerk, who worked together on the particulars of the legislation to ensure that the town would have the resources it needed to effect repairs.

“On behalf of the Town of Southborough, I sincerely appreciate the efforts of both Rep. Dykema and Sen. Eldridge to bring this significant piece of legislation to fruition,” said Mark Purple, the Southborough town administrator. “9-11 Field is widely used by Southborough residents, and members of the surrounding communities for athletic events year-round. Unfortunately, the original field turf is desperately in need of replacement, and financially that was not feasible under the current 5-year permit structure with DCR. With a 15-year lease, the Town will now be able to pay back the bond solely from revenues generated from use of the field, without impacting the Town’s general fund. We look forward to working collaboratively with DCR on a new lease for 9-11 Field in the coming weeks.”

I want to thank Jim Hegarty and Representative Dykema for their leadership on getting this done! This will have a big impact for our kids’ and their sports for years to come. Thank you!