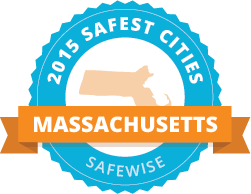 Southborough moved up three notches in the safest cities list for Massachusetts. (Despite the fact we aren’t technically a city.)

This month, Safewise home security updated its list of the 50 safest cities in Massachusetts. (That is, the safest out of communities with over 8,000 residents who submitted completed crime reports to the FBI for the first half of 2014.)

Southborough is ranked #12, compared to #15 in the report posted just this past October. (The original list was based on 2013 crime stats. In January, FBI released the newer stats.)

Once again, our town ranked higher than most of our direct neighbors. The exception was Hopkinton which shot up the ranks from #16 to #4.

The two safest towns were again Wayland and Norfolk.

To take a look at the top 50 rankings, click here.

*To determine rankings based on the crime reports, Safewise:

assessed each remaining city based on the number of reported property crimes (arson, burglary, motor vehicle theft, and larceny-theft) and violent crimes (robbery, murder, aggravated assault, and rape). Finally, to level the playing field for all cities, [Safewise] determined the chance of these crimes happening out of 1,000 people in each city.

Ask any Algonquin student what they think of the formula used :