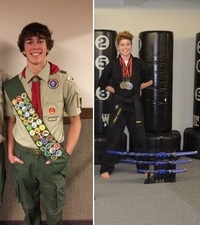 At Tuesday night’s meeting, Kolenda presented her Newman with a coin from the Judge Advocate General’s Corps. He explained:

In the Army, when someone does something really special, military or civilian, we give them a coin.

Kolenda referred to a recent screening of Newman’s Life Lessons documentary at the Senior Center. Another screening will take place at the Southborough Library on March 3rd from 7:00 – 8:30 pm. (You can also watch it through Southborough Access Media’s You Tube channel.)

Mark Dyer of Southborough just earned his Eagle Scout rank. But before that happened, he already received a Emerging Conservation Leader Award from the Appalachian Mountain Club.

The Scout earned both through a project creating a new section of the Bay Circuit Trail:

This required managing the Troop of 30+ scouts who provided over 100 hours in building this trail from scratch, approximately one mile in length connecting the Southborough and Framingham section.

You can read more in the AMC press release.

Six students of The Karate School, Inc. in Marlborough, MA competed at The 22nd Alliance Tournament in martial arts . . . in Londonderry, NH on Sunday, November 15th, 2015. . .