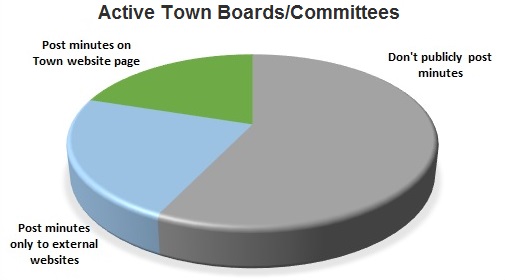 Above: While an important Town board has begun posting minutes, my research shows the Town still has a way to go on that front.

Leading up to last Spring’s Town election, there was a lot of talk among candidates about improving (or not) the Town’s transparency.

Most town officials purported to be big proponents of improving open transparent government. (Including those who weren’t running last year, and ones newly elected.) And Town employees believed updating the website would play a big role.

The new website was launched in November. So, as we head into a new election cycle, I couldn’t help but think, what’s changed?

How transparent is our Town government?

I’m happy to report there has been some improvement. But there are still significant gaps.

Below is my look at the Town’s progress and ongoing weaknesses.

(I’d love to hear readers’ own takes on Town progress, or where improvements are needed.)

Minutes: A little progress
One gripe I’d always had was that one of the Town’s most powerful and controversial boards never posted public minutes. I can’t complain about that anymore.

The Zoning Board of Appeals is now among the seven committees/boards that post minutes to the Town website. (Only two meetings are posted so far, but it’s a good start.)

(Though, sadly, the ZBA’s past decisions, which were posted to the Town website before it was revamped in the fall, are no longer posted.)

Another eight boards only post them to their own websites. (Scroll down for links.) Most are easy to find. But since direct links to them aren’t posted to the Town site, they aren’t all easy to find.

Town communications – oversold improvement
Town officials promised last year that the new website would allow residents to sign up for news on meetings and updates they care about. Unfortunately, that was overstated – at least so, far.

Residents can sign up to receive alerts, but not by category. And those “News Flashes” are few and far between, offering sparse town news. (The 5 sent so far covered the winter parking ban, swap shop move, holiday hours and voter registration deadline.)

There is still no way to keep informed on any specific issues. If you wanted to keep on top of meetings related to specific decisions (like Main Street, zoning, or a 40B) you’re out of luck.

(Of course, if you read this blog, I try to keep you informed on that score. But sometimes a late week meeting can pop up that even I miss.)

The Town does have a twitter account (@17common). That’s a much better source for news and updates. But many are just retweets of news shared by other accounts (like mine). It would be good if more boards and departments made use of that resource to share news. (For instance, notifying the public of known-to-be-controversial items on meeting agendas.)

However, sharing more news online comes with a new set of challenges for the town. (Scroll down to public records failings and challenges for more on that.)

BOS communication: Improvements and regression
The board has kept a promise to add most of the documents in discussion to their posted packets. But, they stopped including the draft minutes, which they had started to include.  And they’ve fallen a bit behind again on approving and posting minutes.

Planning Board communication: Improvements. . . on temporary (?) hold
The Planning Board has been attacked in past years over alleged open meeting violations and lack of open process. The board seems to have turned that around.

The board is one of the few that makes good use of the Town website. Their page is filled with links to materials on many Current Projects in front of the board (I can’t assert all), their proposed Warrant Articles, and more. (I’d love to see more boards follow suit.)

The board also began sharing their meeting packets online with agendas. That stopped happening this fall, but was likely due to temporary short-staffing in the department. (Their assistant was on leave.) And the Town Planner started a blog where she shared important news with the public about the status of projects and issues on the horizon.

While the board’s assistant is back, the planner spot is currently vacant. I’m hoping that both activities resume when the department is fully staff – but that’s unknown at this point.

Information about committees: Improvement and info gaps
Descriptions – In the past, it was hard to find any information on most committees’ responsibilities. That was one reason many residents were hesitant to volunteer. Now, each board or committee has a page summarizing its charge on the Town website.

Contacting committees – The page also lists member names. But there is still no real information on how to contact most of the boards. Many have only the main Town House number listed, no email address for the board, and no email links to specific members.

(Even the Board of Selectmen purports to offer email links for members, but they aren’t there. And while selectmensoffice@southboroughma.com is listed on a linked page for submitting volunteer applications, it isn’t on their page or under “how do I contact a member…”)

Committee appointment by moderator – Unlike when the Board of Selectmen appoints/interviews candidates, there is no public process when the moderator does. And while the website lists those committee vacancies, there is no information on how that process works.

Public records: Challenges, failings, and pending legislation
In December, Town Clerk Jim Hegarty told the Board of Selectmen that new technology and misinformation has led to the Town not properly maintaining public records of communications. (Though, he assured them our Town isn’t alone.)

Hegarty explained that when he started his post, he asked around in and out of town about how to maintain records for texts, twitter, Facebook and email. Since he was getting so many different answers, he reached out to the Secretary of State’s office.

An attorney from the state held a training session on public records which about 30 town employees/officials attended. He learned that there was a lot of misinformation around new technology.

But, even the attorney couldn’t address some conflicts within the laws. So Hegarty said he would to ask Town Counsel about the identified conflicts so they can come up with best practices.

Meanwhile, the laws are in the midst of potential changes. The State House has been working on new public records laws

Senator Eldridge filed and helped pass three amendments, which would establish a working group to examine when to allow the investigatory exemption of law enforcement records, require a substantive written response from an agency or municipality if it intends to charge a fee to produce the records or intends to withhold any records, and require more public records to be made available online.

The bill the Senator voted for would reduce the cost to those seeking public information:

The bill limits the amount that state agencies and municipalities can charge for production of the records. The limits are set at 5 cents per page for copies, down from 20 to 50 cents per page under current law, and the cost of a storage device. The bill requires state agencies to provide four free hours of employee time and two free hours for municipalities. Charges for requests that require more time are limited to $25 per hour.

The outcome is still up in the air. The Senate’s bill still needs to be reconciled with the version passed by the House before being sent to the Governor.

Is the Town making enough progress?

If not, would you be willing to invest more of your tax dollars in resources for improving communications? (I’m assuming that lack of dedicated man-hours is the main reason the Town isn’t posting more to the website.)

*Finding Meeting minutes
For those of you looking for minutes that aren’t posted to the Town website, here they are: