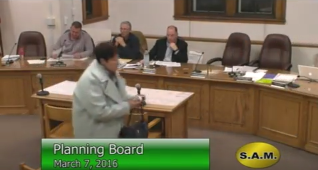 Above: Kathy Bartolini, shown here leaving Monday’s meeting, has announced she will be leaving the Planning Board at the end of her term. (Image from SAM video)

Residents have only eight more days to pull papers for the coming Town Election, and 11 days to file with signatures. (For the full list of who has already pulled papers, scroll down.)

If you are considering throwing your hat in the ring, you may want to pull papers today or tomorrow. Saturday looks to be a nice day for standing around the Transfer Station with a clipboard!

In my last update, I noted that there were no contests yet. That’s changed with two residents putting up their name for one Planning Board seat.

The seat has been held by Kathleen Bartolini for the past 5 years. According to Southborough Wicked Local, Bartolini announced on Monday that she would be stepping down. She was already aware of one candidate’s pulled papers and encouraged others promising “You won’t be bored.”

The Planning Board is charged with drafting revised zoning bylaw language and restrictions for development and Open Space.* With that in mind, the potential candidates for this race are an interesting contrast.

Developer Craig Nicholson has pulled papers for the spot. And Meme Luttrell, current Chair of the Open Space Preservation Commission, has already filed her papers for the post.

Founder of a real estate development company in Massachusetts. Our focus is on developing commercial, retail and mixed use projects throughout the Northeast.

Luttrell is an advocate for conservation and Open Space. In 2012, she was awarded the Elaine Beals Conservation Award for working “tirelessly to protect open space and the environment in Southborough”. Some of her listed credentials included:

Meme was a moving force behind Southborough Citizens for the Community Preservation Act and succeeded in getting it on the ballot and successfully passed by the voters. . .

She helped lead the town sponsored public outreach for purchasing the conservation restriction on Chestnut Hill Farm working alongside SOLF and SVT.

Luttrell was one of the voices critical of past Planning Board zoning bylaw revision drafts.In 2012, Metrowest Daily News wrote:

A number of residents — including the town’s Open Space Preservation Commission— are concerned that a proposed bylaw intended to promote land conservation land could lead to overdeveloped neighborhoods. “It takes away the benefit of having the open space,” commission Chairwoman Meme Luttrell said Tuesday. “It seems to be tilted very much toward the development community.”

Board of Commissioners of Trust Funds – vote for one – 3 year term
Nicholas McCoy, 10 Jericho Hill Road (candidate for re-election)

Board of Health – vote for one – 3 year term
Mary Lou Woodford, 18 Bigelow Road (candidate for re-election)

*Changes to zoning bylaws must be passed by residents at Town Meeting.

**Dolores Fallon is currently serving on the Board of Library Trustees as an interim appointment, therefore not officially listed as a “candidate for re-election”.

Updated (3/10/16 2:51 pm): I updated to reflect that Bartolini announced she won’t be running for re-election.